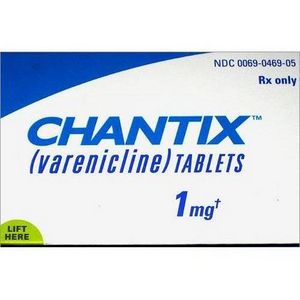 I would love to say this product works however I had to quit taking because it messed with my other medications. Before trying please talk to a medical professional especially if you take any type of medication. I slept walk with nightmares and slept ate.

It works, period. Cigarettes taste different when taking Chantix. I never write reviews, but I made a point to sign up here just so I could say: IT WORKS! :D

Chantix does exactly what it says it will. I smoked for over 30 years and after 2 months I no longer even wanted a cigarette. Two years later and I am still smoke free! Thank you Chantix!

I have tried lots of smoking cessation products and techniques. Cold turkey, patch, gun, exits- no luck. I had smoked for a number of years when I decided to give chantix a try after it's immediate popularity. I could not believe how easy it was to quit smoking. You are allowed to smoke during the first week but After the first few days of taking it, I would just forget to smoke. It was unbelievable! After taking for about a month, I had some cocktails with friends and smoked one out of social habit and I couldn't even finish half because it tasted awful. I ended up taking the medicine for about 4 months (which is a shorter time than recommended and I should know better because I am an RB, BSN) but continued to be a non smoker for months after. Unfortunately, I gained about 10 pounds. Not because of the medicine, but because everything tasted amazing! The whole taste dulling of smoking had worn of and I found a new love of food... all food. It came at a bad time- I was planning for my wedding! Bad decision #2 was picking the cigarettes back up to help drop the pounds for the wedding. It worked of course, but I kicked myself for smoking so I thought another round of chantix would kick the habit and I would watch my diet. BAAAD decision. The only side effect that I encounter the first time was occasional constioation (not a typical side effect), but round two came with a total personality change. I was angry, annoyed with everything, upset about little things- basically a crazy person! I even KNEW how irrational I was being in situations but I couldn't stop myself. I'm not a regular drinker (though I've mentioned it twice now lol) but having 2-3 drinks on the second round made me feel HORRIBLE. I started to sleep walk, lose memory, and basically just lose my sanity! I only managed to stay on the Chantix for about a month the second time and thought it was safer for everyone involved to just keep smoking instead! Moral of this story: make sure you quit the first time!

I used chantix and I would recommend this product to everyone. I smoked for over 30 years and quit .Thanks to Chantix. I haven't smoked in 5 years and haven't had any cravings either.

It became very important that I quit when I found out I had a Genetic Lung/Liver Disease. I had quit once before, and knew how hard it was to quit cold turkey. My doctor gave me a 1 month supply, and before 3 weeks was over, I was DONE!!! No more smoking. Smoke free since 3/4/2010.

I STARTED CHANTIX BECAUSE MY BOYFRIEND HATED THAT I SMOKED CIGGARETTES. I PROMISED HIM I WOULD STOP, EVEN THOUGH I ENJOYED THEM. I KNEW THEY WERE GOING TO KILL ME SO I ASKED MY DOCTOR FOR CHANTIX. STARTED TAKING THEM ON A MONDAY AND HAD MY LAST CIGG. 8 DAYS LATER. I DIDNT EVEN WANT TO STOP SMOKING, BUT THIS DRUG MADE IT SO EASY TO JUST STOP. I DEF STILL GOT CRAVINGS HERE AND THERE BUT NOT ANYWHERE NEAR AS BAD AS WHEN I TRIED COLD TURKEY (DIDNT EVEN LAST 8 HOURS) ....ITS WEEK 3 AND IM STILL TAKING CHANTIX AND I FEEL AS THOUGH I COULD JUST STOP TAKING THE MEDICINE AND NEVER SMOKE AGAIN, BUT SCARED I MIGHT GO BACK. SO IM GOING TO STAY ON THE MEDS FOR ANOTHER MONTH AND HOPE I NEVER GO BACK. CHANTIX DEF SAVED MY LIFE AND WORKS AMAZING. ITS KIND OF SCARY HOW I NO LONGER HAVE ANY DESIRE TO SMOKE. THE ONLY SIDE EFFECT I GOT WAS NAUSEA WHEN I DIDNT EAT FOOD BEFORE TAKING IT. DEF RECOMMEND TO ANYONE WHO WANTS TO STOP SMOKING FOR GOOD!

I was a pack and half smoker for 21 yrs. I enjoyed smoking. Only because my insurance paid for Chantix and I could smoke the first week while on it,did I agree to TRY . After getting through the first two days of nausea, I found myself wanting and needing less cigarettes. I made sure I took it as instructed, you know to say I tried. Before I even finished the medication, I wasn't smoking!! I didn't even want one. To this day, I shocked myself. I never would have believed, I stopped smoking!!!!!!!!!!!!

I am so glad I chose Chantix to quit smoking.

This product does work but you cannot do it alone, you have to be ready to quit and have a great support system in place. Effectiveness I took this product twice, the first time I quit for 18 months, and the second time I am 6 months smoke free but this time I can be around other smokers and I can move past the desire to smoke. Ease of Use If you can remember to take this twice a day first with the starter pack and then with the maintenance pack they this can work for you. Side Effects I have heard many different stories about this that at first I wad hesitant to use it. I joke that I guess i was crazy already because that was not a side effect for me. Immediacy If you follow the quit plan you set up and you desire to quit is big then you will do fine. Before I quit I made sure to stop with my routine smoking like after meals, my morning coffee etc.. Pick you hardest time and adjust them by doing something else. Cutting back helps to. Bottom line if you want it to work it will. Dosage Control Take in the morning and at bedtime should work depending on how long you are awake may make a difference.