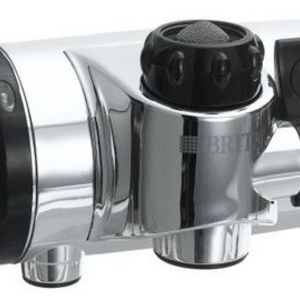 Trying to make a good choice of Christmas gifts for co-workers is many times more difficult than for Family members and relatives. Not knowing what is both appropiate and cost effective for people you don't know intimately turns out to be a guessing game big time. Such was the case in my very poor selection of a gift for a former boss of mine whom I believed was a very conscious advocate for healthy living. I struggled before deciding to purchase a Brita faucet filter for use in the lavatory sink in his private office, shortly after the gift exchange, my boss called me to his office and abruptly handed me the Brita filter and told me that these things do not work and I could have it back. Well needless to say, I was very embarrased and somewhat speechless by the whole event. I found myself apologetic to my boss without really understanding why I felt that way, so I accepted the water filter, bowed my head and walked out of his office and never have truly understood the whole thing. Interestingly i have used the Brita faucet filter for many years and found it to be a very effective and useful device. Who could tell!

I finally felt convicted to do my part for the environment and my first step of action was to quit buying bottled water.  The problem with that is I am addicted to it--the taste, the idea of a quick and easy bottle etc.  I have a thing about tap water--I HATE IT!  I can barely drink restaurant water.  Thankfully, I found the Brita Disposable Kitchen Filter.  I didn't know that my own tap water, which costs pennies compared to expensive bottled water, could taste so clean, refreshing and delicious!  The best part is, I only have to buy a small water filter every three months rather than two to three heavy cases of bottled water weekly!

I think this product offers all that it promises too. It looks great in any kitchen, especially those that have a stainless appliances or silver faucet. You will instantly notice the difference in your water from the first glass. This product also has a handy feature of letting you know when the filter needs replacing so there is no guessing or counting days. The only thing that I didn't like about this product was that the filter does seem to need to be replaced quite frequently, so if your family uses the filter for all water use in your house ( like cooking, drinking, etc.) it can get a little spendy to continue to replace filter. The actual mount is very easy to clean and even almost two years later looks great!!!

I bought this filter in order to save money on buying bottled water.  I highly recommend getting a filter if you currently buy bottled water.  It is not only a money-saver, but it is much more environmentally friendly for the green folks out there.I haven't had any problems with the Brita filter.  So far there have been no leaks.  My only complaint is that the filter only lasts for about 3 months (although it is advertised to last a whole year).  A steady red light indicates that it is time to change the filter.  I have used the filter for about a month after the red light came on, and our water still tastes good (you can tell the difference between filtered and unfiltered water).

We had PUR faucet mount water filters for a few years - I will be reviewing them soon.  Anyway, I had seen the Brita disposable faucet mount systems for the kitchen and bathroom, and decided to try them to see if it would be more cost effective to use a disposable unit rather than getting replacement filters every month or two.  I had to call Brita for the different faucet mounts that they offer free of charge - the ones that came with the unit did not work right with our faucet - probably part of the problem we had with one of the PUR units.  They were really nice on the phone, and I got the extra mounts really quickly.  I installed the unit, and used it as we usually do - for just about everything - to fill the coffee pot at least once a day, for iced tea, for drinking water, to mix concentrated juice, to make Kool-Aid, for ice cubes, for drinking water for the bird and cat - you get the picture.  I was really impressed - I installed the unit in May, and was still using the same unit in September, and the light was still green.  When the light starts flashing red, you are getting low on filtration and need to get a replacement.  Anyway, I was getting the coffee pot ready, the light was still a steady green, when I suddenly had water all over the kitchen.  Somehow, the unit had sprung a leak.  I called the 800 number listed on the directions the next day, and they said they would send me a return label so that I could send the defective unit back to them, and once they got it they would replace it with a new unit.  I sent the unit back, as instructed, and waited.  And waited.  And waited.  Just before Christmas, I called them again, and was told that they had not received the defective unit. They suggested giving it a few more days, in case communications had gotten messed up with the holiday rush, etc.  I gave it another 2 weeks, allowing for Christmas and New Year's, and then called again.  I was again informed that they had not received the old unit, and that company policy required that the old unit be returned before a new unit could be sent out.  The CSR was really very nice when I said something about this policy.  She spoke with a supervisor, and it was decided that since the only times I had called were for the different faucet mounts and the defective product, they could make an exception and send me a new unit. I was quite impressed - the original unit lasted a lot longer than I really expected it to, given how much we use it (yes, I did buy another one while all this was going on), and each and every CSR that I spoke with was really great, courteous and polite and trying to help.  I would really recommend this to anyone who is looking at these units - I set great store by customer service, and theirs is great.  The units are a little pricey to start, but they do last a lot longer than I thought, a lot longer than I got with the PUR replacements for their unit, so cost is at least equalized, if the Brita is not any cheaper.  I have not yet done the math on that one, since the kitchen unit went out on me and I had to start over, but I am very pleased so far with the customer service and the taste of the water.  We have city water, and can really tell when the water has been treated at the plant - everything smells and tastes like a swimming pool.  A really great product.