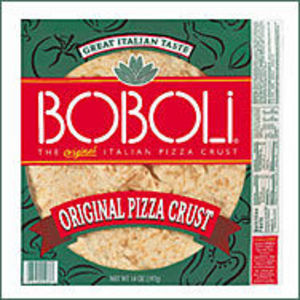 I've enjoyed pizza made with Boboli crusts many times over the years. Lately, it's been even more frequently when I need a quick dinner for the family. For me, Boboli is a much better option than fast food and way better than frozen pizza. It is something I can prepare at home and I can control what I put on it. To me, that also makes it healthier. The crust tastes really good. It has a slight tomato taste to the actual crust and hint of something sweet, as well. The crust also smells really good, almost like fresh dough. When cooked, it has a great texture and comes out perfect every time. The crust is not greasy, nor is it dry. You can bake it on a pan for a softer crust or bake it right on the oven rack for a crispier crust. Either way, it's delicious and cooks in 8-10 minutes. Also, the pizza sauce that comes inside the Boboli pizza crust package is also really good and pairs nicely with the crust. The crusts come in a personal size or family size, too.

I discovered Boboli pizza crusts a few years ago. I love pizza but never tried to make one myself - seemed like too much trouble. But Boboli makes a quick and easy pizza. I usually use a thick spaghetti sauce and just spoon it on top. Then come the toppings - usually green olives and banana pepper. Then I sprinkle on some grated cheese (different kinds - all cheese is wonderful on pizza in my opinion). It bakes quickly and the crust is firm enough not to get soggy but it doesn't get too crispy either so long as you don't leave it in too long. It's also nicely seasoned and is a thick crust. And you can use them in a lot of different ways - sometimes I just brush on some olive oil and put a few slices of tomato on top with a little Parmesan cheese (I usually just use the Kraft kind from the can). And once it's cooked it's wonderful (it doesn't take long since the crust itself is pre-cooked). You can even just brush on the olive oil and sprinkle some herbs on top and have a nice, simple snack in no time. It is, however, a little messy to eat since the crust isn't like conventional pizza crusts with the "walled" edges - Boboli is puffy and without the walled edges so it may drip more.

If you are looking to build your own pizza, but are not quite the master chef you want to be, look no further. Boboli pizza crusts cook up really well and can make you feel like you are actually creating a pie from scratch. Simply load on of these puppies up with sauce cheese and toppings and away you go.

I first found these pizza crusts at a Mrs. Baird's bakery outlet, where they were very reasonably priced.  I thought "What have I got to lose?" and picked up three or four of them, along with some of the pizza sauces.  Since then, we have had them several times.  They are great for those nights when I come home from work, tired, with nothing thawed out for dinner.  I get one out of my freezer, put the sauce on, add sliced pepperoni and shredded mozzarella cheeese.  It goes into the oven, while I fix a salad, and we are able to sit down to dinner in around 30 minutes.  I went back last week and bought 7 more, along with 2 packages of 2 each of the smaller, individual pizza crusts.

Boboli pizza crusts are awsome. We have a family night on Friday nights. As a family it is fun to make the pizza together. It's quick and easy. You can make it your way, add whatever you want your the pizza maker. Since being introduced to Boboli i have never rolled out pizza dough again. If you haven't tried it yet, your missing out. Why buy frozen pizza when Boboli is faster and more fun. I highly recommend this product.

These crusts are very good.  They are also very convenient to use, especially when you are in a hurry to cook.   We like the thin crusts better.  My husband will make a breakfast pizza on them and they are very delicious.  I have used the thicker crusts and we like them also.

I'm the cook in the family and, on those days when I have very little time, or very little energy (or very little of both) it's always a hassle figuring out what to have for dinner. Take-out gets tiring, and it's usually pretty greasy and devoid of veggies. Being from NYC, I'm a pizza snob, so it was reluctantly that I bought my first Boboli Pizza Crust. It sat in the fridge for a week or so before I got to an evening that found me way too tired to do any real cooking. When that night arrived, I sceptically pulled the crust out of the fridge, covered it with pesrto, sliced onion, spinach leaves, fresh mushrooms, sundried tomatoes, and a little cheese, and popped it in the oven. Twenty minutes later, my partner and I were eating a perfectly acceptable dinner: lots of veggies, not much fat, and really tasty. Now, I won't lie and say that it's just like having pizza at my favorite pizzeria in Brooklyn, but it's a heck of a lot better than the cardboard that places like Pizza Hut have the nerve to call pizza. I like being able to control what goes on my pizza, and being able to load up on veggies so that it ends up being a treat that's actually good for me. And, really, the crust tastes just fine and has a decent texture. This is probably the best convenience food product I've found in a long time.