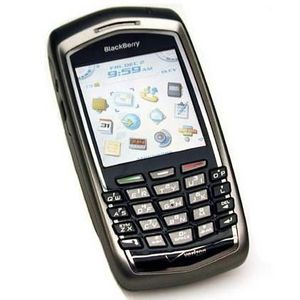 Overall it's a good, basic, relatively reliable combination of cell phone and e-mail serviceHowever, it's too basic - does not have any advanced features that other smart phones often provide. It does not feature a touch screen; its web interface is very mediocre, its screen resolution should be better, and its speakerphone if pathetic...

Experience is the answer. I've tried them all. Nothing beats the coverage and reliability of the verizon network. The commercials that praise the contrary are wrong. I drive everywhere. No dead spots. No dropped calls. Crystal clear right-next-door quality no matter where I am or where the other person is located. Save your time and money - stick to the VZN network and use a Berry to do it. It's easy to use, simple to navigate and understand, comfortable and very VERY reasonably priced considering the value.

i personally *love* this product. it has so many great features that i love using. i love the scroll ball in the middle. i also love the brick breaker game for when im bored and on the go. overall a great item to have.

The Blackbery is difficult to use and comes with no good instruction manual.  The keyboard is alien.  It takes too long to connect to the web and get any kind of valuable inforamtion.  If I go out of my provider area the whole thing shuts down.  Then I have to remove the battery reconnect and reboot.  Wish I did not get it but signed a two year contract.  IF youare an individual and not with a company there are no classes to attend on how to use it.  The icons are unfriendly.  It is not user friendly.

I like the phone in general. I have had it for about a year and a half. The quality is what I would question because I am on my third one since I have the insurance it is relpaced for free which is what keeps me from buying a new one. The keypad has a delay and can sometimes freeze.

Canadian based *Research in Motion* (RIM), the makers of the now infamous *BlackBerry* has been much in the news of late.  And for a while there it looked as though the much ballyhooed wireless data provider was going to have to close up shop, but at the last moment they agreed to pay up, and so let the data-and in my case, the voice-fly.  It's a good thing too, since the U.S. government is heavily invested in Blackberry technology.          Last year the company I work for recently decided to rollout BlackBerry's to a few select individuals in the company and since I am the email administrator I got to integrate the *BlackBerry* service into our email infrastructure, and pick up a *BlackBerry* device in the process.  The business decided on two models of BlackBerry: the *Blackberry 7250* (data only), and the **Blackberry 7130e **(data and voice); I received the latter.  We procured our Blackberry's from *Verizon Wireless* our current mobile phone provider.      **The Product ** The **BlackBerry 7130e** smart-phone (handset) is ideal for users who prefer a combined wireless voice, email, and data all from one small device. The brushed gray **BlackBerry 7130e** offers top-of-the-line features, such as a speakerphone, Bluetooth wireless technology and polyphonic ring-tones, all bundled in a lightweight, sleek, and stylish handset.  The **BlackBerry 7130e, **which ships with 64MB of built-in memory,** **is** **the first BlackBerry smart-phone to take advantage of the *Verizon's* mobile network operator's EV-DO (**EV**olution-**D**ata **O**nly) network.  EV-DO is part of the third generation (3G) of high-speed data enhancements to the CDMA cell-phone technology.  *Verizon* claims that its *BroadbandAccess EV-DO* network offers high-speed Internet access anywhere, any time.  Two years after its introduction, the network has evolved into a mature infrastructure that I have yet to fully tap into, but so far it has lived up to its promise of anytime anywhere data and voice connection.    The **BlackBerry 7130e** includes RIM's proprietary (and exasperating) *SureType* thumb-board.  A cross between a keypad and fully-fledged QWERTY thumb-board, *SureType* relies on predictive text functionality to enable input.  The concept is sound, but the execution is flawed.  I ended up tuning the feature off, because it takes much more time to teach the technology how you type, rather them just type with the devices Multitap keyboard.  Granted it take some getting used to but I have mastered the subtle nuances of the keypad.  Where the *RIM* **BlackBerry 7130e** really shines (no pun indented) however, is the above average 240x260-pixel, 65,536 color LCD display screen that produces super sharp text and images, as well as vivacious colors.  It is one of the best BlackBerry screens I have ever seen, and certainly rivals that of other Windows CE and Palm Smart-phones.  And it puts the older BlackBerry devices with their monochrome screens to shame.  I am continually amazed at the brightness and clarity of the screen; it is a huge selling point as far as I am concerned.  **My Viewpoint ** My **BlackBerry 7130e** replaced my cell phone, while other users use a BlackBerry and cell phone.  As a cell phone I find the **BlackBerry 7130e **adequate but** **not spectacular.  I am very use to flip phones, so the **7130e**'s straight forward design took a little getting used to.  When I place a call people can generally hear me, but I have a hard time hearing them clearly and with enough volume.  This might be alleviated by a Bluetooth headset, but I cannot get my *Motorola HS820* Bluetooth headset to connect to the **BlackBerry 7130e**.  I have ordered another Bluetooth headset from Verizon, hopefully this one will work.  And I have yet to test a wired headset with the device.  You can place a call directly, or via the address book, by clicking on the phone icon.  As I stated above, once you are connected you can activate the speakerphone, which offers decent clarity.  On-screen displays allow you to control the volume and provide other useful information such as the duration of the call and of course the number.  Coverage through the Verizon network is outstanding even in my house where historically, my cellular reception had nose dived.  While at work my reception never falls below four bars, and at home I typically get two, but it is enough to send and place calls and send and receive data.      **  ** A very useful feature is the ability to automatically turn the **BlackBerry 7130e** on and off at specified times during the day.  I have mine set to shut off at 10:00pm and turn on again at 7:00am of the weekdays.  There is also a separate weekend setting. Battery life for the **BlackBerry 7130e** is stellar.  The initial charge took about three hours, but I have since gone three days at a stretch without recharging the unit and the battery life only dropped by a quarter and this is with moderate email and phone activity. **Concluding Viewpoint** All-n-all I am very satisfied with the performance of the **BlackBerry 7130e.  **The unit is small, extremely lightweight, and offers outstanding battery life.  And while it took some getting used to the keyboard, I am now at one with my go anywhere, connected to everything device.