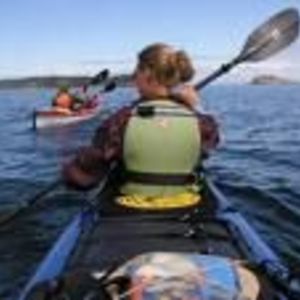 This is such a cool and interesting and unique and wonderful experience!  I had never kayaked before (although I had canoed) and it was easy.  The staff made it easy to do.  The experience of viewing the bioluminescent creatures was just amazing.  You had some time on the water to get used to kayaking and then the darkness fell and the luminescence began.  It was just great!  Just long enough to enjoy yourself without being so long you got tired or bored.  My young daughter loved it too.  I highly recommend it!

This tour was a great experience and a wonderful find. I had visitors from Cornwall, UK and they wanted to see the manatees, so it was off to visit a friend in Titusville, FL. She told me about the tour while we were discussing options. I had always enjoyed bioluminescence when I saw it, but on the west coast of Florida, where I had spent more time, it is not a reliable occurrence like it is in the brackish waters of the Indian River Lagoon near Merritt Island and Cape Canaveral/Cape Kennedy.  This quickly became a must see.   **Slow Start ** Getting the reservation took a couple of emails and a couple of calls. The response was a little slow, but my friend and the tour owner had worked at the same church, so I was patient and trusting. As it turned out the owner was out of town and handling business remotely, so this initial difficulty may be unusual.   **Arrival ** Directions were well written. The staff prepared the equipment and gave paddling and safety instructions. I have seen the instructional portion presented as a comedy routine at one rafting trip, but these guys simply played it straight. Several manatees and dolphins (porpoises) played in the lagoon as our equipment was being readied. One person remarked that it was as though they had come for the sole purpose of putting on a show for us. We were given life jackets, glow sticks, emergency whistles and paddles. We all took a few turns in the lagoon to make sure everyone was comfortable.  The launch spot is near a manatee observation site, so you may want to allow some extra time for additional potential viewing.   **The Trip** We headed down a canal and stopped at a spot with a beautiful view of the shuttle launch pads, five miles away. This is a location where several of the very best launch photos have been taken. Here we waited for total darkness. There was a beautiful thunderstorm in the distance and the sky was putting on a show for us as well as the water. After darkness fell, we headed into a shallow lagoon and chased the mullet (fish). One jumped into the boat with our young Brit and he had quite a trill. This can be high activity, or you can sit back and watch from a distance. I enjoyed running my hands through the water and watching the glow streamng behind. Later we paddled to a spot where there are frequent dolphin and manatees. Some of the quick paddlers arrived first and saw these, but by this time we are paddling back and going against the current, I was a little slower and didn't get there right away. For some tours this can be truly awesome. The glow of dynoflagelates is usually reliable from the time it shows up in late June through the summer. The intensity of the effect can be lessened by the light of a full moon or a recent heavy rain. Hurricanes may also cause interruptions. For us it was dimmed a little by a rain, but spectacular all the same. This trip we paddled for about three miles. As a novice, I had guessed it at about two, so you know I was having fun!   **Comments I heard** The visiting rafting instructor: "This is the coolest thing I have ever done." The British teenager: "I'm going to get a job so I can come back and do this again." The three year old: "Ooh, Daddy look!" **To sum it up** This is definitely the best kayak tour I have ever taken and I highly recommend it The website with additional information, tours and reviews is:http://www.nbbd.com/kayaktours/