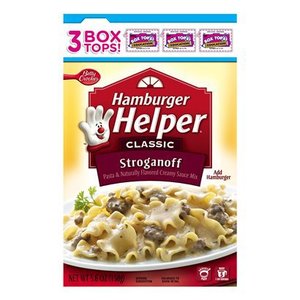 Hamburger helper has been around for a long time. I remember having it as a kid and now my kids are eating it. It's a good family meal. If I had to pick one flavor out of all the hamburger helpers it would have to be this beef stroganoff one. For some reason in the past it seemed like you got more in the package then you do now, but maybe I'm not remembering right. It seems like there are less noodles. It does have a good beef stroganoff taste to it. I don't buy this all the time as it does have chemicals and added stuff to it, but it's a good thing to have once in awhile. It's pretty fast and easy to make. You just have to have some ground beef on hand. My whole family eats this stuff up and say that they love it, so it's good taste wise. It's a good comfort food. The texture is pretty good. I don't find it as good as a leftover, but we still eat it as leftovers and it's fine. It has a pretty good texture to it. All in all it's not a bad meal to have and a couple boxes will feed a family.

This is the classic hamburger helper. Delicious and easy to make! Quick filling dinner for tastes of all kinds. The only suggestion I have is adding more than one pound of ground beef. One pound is not enough to even out the amount of noodles and sauce in the box. Also, if you have a big family, you should probably make two boxes because one will leave everyone hungry. That is unless you make a bunch of other side dishes to go with the meal. I think that is unnecessary though because of the great taste and mixture of meat and pasta. Make sure you follow the directions and do not cook it too fast because the noodles will stick to the bottom of the pan. This is by far my favorite flavor though because it tastes good, the kids love it, and there is only two major steps included. Some hamburger helper meals take too long to make because there are four or five steps to make it and you would rather have made a meal from scratch for that amount of work.

I love the Beef Stroganoff flavored Hamburger Helper! It is delicious and a great dinner. It is very simple to make. It also does not take a lot time. Which is really helpful, because some days it is just not easy to spend a long time on making dinner. The Beef Stroganoff has a great flavor, and requires only three ingredients. Hamburger helper has made different versions of the original Beef Stroganoff, and the original is still by far my favorite.

I love to cook but sometimes do not have the time to prepare an entire meal. That is where the hamburger helper comes in, I mean in thirty minutes you have a family meal. The Betty Crocker Hamburger Helper Beef Stroganoff is one of our favorite flavors of helper.

I love Hamburger Helper because you only need to use one pan to cook it, no need for draining the pasta at all. I also love the taste of the Stroganoff, it's a thick flavorful sauce and the pasta ends up just soft enough. You do need a fairly large pan to cook this since it does require 1 lb. of beef and 2 cups of milk, but that's hardly an issue. Stroganoff and Beef Pasta are the 2 best flavors for sure.

The original Stroganoff Hamburger Helper is one of my husbands favorites. I recently purchased the new Ultimate Hamburger Helper Stroganoff. We unfortunately did not like it as well as the original. I think the white sauce that you add at the end is what ruined it for us.

Though I generally prefer to cook a little healthier, there are those time when budget comes to the forefront and in comes the good old "Hamburger Helper". Of all the flavors, and there is a lot, this one is my family's favorite. I love that you can generally find a coupon for it. Add the coupon with a good sale and you can find this for REALLY cheap. In the past, I've added other things than just hamburger meat to the mix. I've used ground turkey and ground chicken. Neither are quite as good as hamburger meat, but they are still good and sometimes I just base what I use on what is on sale. It doesn't take a lot of time to make, and some nights, it's a huge relief to just pop some ground meat in a pan, brown it, and then follow the directions on the box. Add some vegetables and biscuits to the meal and your family is happy.

Yesterday was a long day; the living room was a mess, the dishes from last night's dinner were still sitting in the sink, and we had a church activity at 6. I needed a quick meal that wouldn't make a huge mess or a lot of leftovers, so I opened a box of Hamburger Helper: Beef Stroganoff. We've tried Hamburger Helper before, and we haven't usually been impressed. Maybe it is my own fault, because I am cheap and don't want to use a whole pound of beef and decide to use only half a pound. Maybe it is just because it is a meal in a box, and how good can that be compared to a home cooked meal? Either way, after we tried a few kinds, we decided to stop trying. But, it was on sale for a great deal, so I decided to try the Beef Stroganoff variety. Once again, I only used half a pound of meat, and I actually used ground turkey, which worked perfectly. It tasted great! We loved it, and ate it all! The box says it takes about 10 minutes to cook the noodles, and at ten minutes, mine still needed about two more minutes. Also, at that point, there was a lot of liquid in my pan, so I left the lid off for the rest of the time to try to thicken it even more. We let it sit about 5 minutes after it was done, and it did thicken enough. I thought it had a great flavor, but I did think it was also salty. Maybe that is just me, because we don't add a lot of salt, but it seemed to have plenty of salt to me, and I was so thirsty afterwards. But, was it worth it? Yes! It was so fast! I had time to set the table and make a quick salad and dinner was ready! To make it even faster, I heat up the water and the milk in the microwave for awhile until they are both warm. That makes it boil much faster in the pan. Enjoy your dinner!

When our local store had the sale on hamburger helper, we made sure to stock up on this brand.  They come in all sorts of delicious flavors.  These pasta dishes will sure to make your family happy at meal time.  The meal is easy to prepare because the package includes the pasta and seasoned powder or flavor packet.  All you need is ground beef.  You may add additional pasta to increase the amount, to feed your family of four.  We had this tonight with canned corn on the side.  Hamburger helper stroganoff is a staple in our family.  Tangy zip with a lot of flavor.