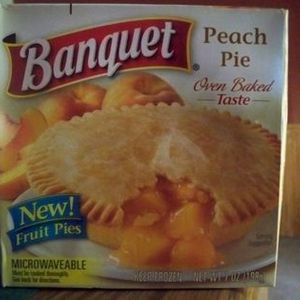 I wanted peach pie in September of 2015. I bought several peach pies in the frozen section. I was amazed to discover that banquet had the best hands down. I was really surprised because it was the most economical. I eat 5-7 pies a month since then. I cook different because I like my crust harder then it would get with the directions. I use the oven method and my oh my!!😊🙃😋

I like to buy Banquet Fruit Pies because they are nice and small-perfect to satisfy a craving or for someone who does not eat pie that often. I have tried the peach and apple varieties. The crust is nice and flaky, and inside are nice chunks of tender fruit. The fruit is covered with a sweet and tasty glaze. They actually taste really good! They are great when served with a scoop of vanilla ice cream or whipped topping!

Me and my Fiance bought these on a whim when we first moved because they were super cheap and tried them and loved them! I have a super sensitive pallet and never got a funky chemical taste or anything. My one complaint is that the apple one has so much cinnamon in it that it's bitter. Other than that we LOVE them!

We tried these cute little pies and we just love them. They are just the right size. We have tried all 3 flavors and like them all equally. They are a great value for the amount that you get in each serving. We will continue to buy them and recommend them to people.

While at the grocery store this weekend, something in the freezer section caught my attention, new Banquet Fruit Pies. Just like the chicken and beef pot pies they make, but these have fruit inside. I found apple and peach, so I decided to give them a try, since we also like the pot pies. It says you can microwave them, or bake in the oven, I baked ours in the oven. Baking time was around 35-40 minutes, the box said 30-33, but we like ours a golden brown, so I let sit in the oven just a bit longer than the directions said. I tried the peach and my husband had the apple pie. They are the perfect little size, just enough, maybe even too much, (although I was still full from supper) We were very surprised, they were much better than I had expected. The crust was flaky, and cooked just right, no doughy spots anywhere. the pies were full of fruit, real fruit, nice chunks of peaches and apples. The apple pie had just a hint of cinnamon. I will be buying these, and do recommend to everyone.

In the sun, FL

We tried Banquet's small apple and berry fruit dessert pies and had to throw them out. We are not picky and didn't expect them to be terrific but they have a terrible, chemical, soapy (?) type taste. Banquet should really recall these, they have been in business to long and are thought of to be reputable so they should pull them, and work on the recipe to get them right, because they would make a great little dessert. We called Banquet yesterday about it but they said no one has complained. So today we googled it and apparently there are thousands of other people who are having the same experience.

So, I thought these were gross! I tried the Cherry and the peach. The Cherry fruit was bitter and the sweet filling had a strange non-food taste almost like dish soap. The Peach Fruit tasted just fine and the crust was great on both but the filling on the peach pie filling tasted like it had soap in it .

My husband and I tried the berry fruit pie tonight from banquet. It was so bad we had to spit it out and throw it away. It has an awful chemical taste to it. Something must be wrong with their testers if they don't taste this. I would not recommend buying the berry pie.

was excited for the pie, bought a cherry berry one and an apple one. My husband and i did not find them extremely appealing. The cherry berry pie looked delicous, but was not paletable. i love pie crust and it was so salty, it ruined the pie unless i just picked at the fruit inside. my husbands apple pie was better, but the crust had a thick layer of powder on top which thickened in yoru mouth. I won't be buying these again.