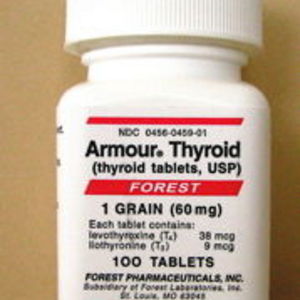 ***Quick View:*** Most people with hypothyroidism (underactive thyroid) do well on synthetic thyroid hormones like[ Levoxyl][1] and Synthroid. I did for a long time. I wrote a glowing review of Levothyroxine aka Levoxyl in June of 2007. It was working great for me then. But sometimes these medications just don't cover all the symptoms or they just poop out. LevoxyI pooped out on me! I was having a lot of thyroid issues this summer and was switched the older, natural thyroid hormone, **Armour Thyroid**. WOW, what a difference. I feel so much better!***My Experience with Armour Thyroid***First let me say that no doctor will prescribe **Armour** for you if you have an underactive thyroid as the first line of defense. **Armour** has been almost phased out because it is made from pig thyroid and the newer synthetics are thought to do the same thing with more precision. Synthetic hormones only provide people with T4, one key hormone to regulate the thyroid. Usually that is enough to stimulate the thyroid into making the "energy hormone" T3 on its own. Sometimes though, patients need both T4 and T3 to feel their best. That's when your doctor may decide to switch you from synthetic to natural hormones. **Armour **contains both T3 and T4.I have had an underactve thyroid (Hashimoto's Disease)  for several years. Until recently, I was fairly symptom free of the major issues that come with a sluggish thyroid like weight gain, depression, lethargy, hair loss, and excessive sensitivity to cold. I had *some *of those issues but they were much less blatant on the Levoxyl than off so I was relieved and content.Recently, though, I started feeling awful. I was tired, listless, gained about 10 pounds and could NOT lose it even exercising daily and eating 1000 calories or less, and my hair was taking a beating and looking thin. I just knew something was wrong with my thyroid but the tests revealed I was in the right range for a normal functioning thyroid. My doctor wouldn't even raise my dose of Levoxyl because "the numbers" said I was fine. I was NOT fine so I finally asked to see a specialist.Cutting to the chase, the specialist switched me to** Armour Thyroid**. At first, I didn't want to switch because it was made from pig thyroid and that seemed so gross. Plus, it's an old medication and has to be taken twice daily. But I was feeling pretty awful so I gave **Armour** a shot.That was in mid September. It is now mid November. I have lost 13 pounds while eating 1300 calories a day rather than 1000. My hair is thick, shiny, and not dropping out of my head. I no longer HAVE to take a nap to get through the day and I'm not cold anymore. I also look better. I mean, you can actually SEE that I feel better. I'm not a ball of energy and probably never really will be but I certainly have more than I have had in a very long time and I find the little dark cloud that has followed me for years seems to have lifted. I have been through a lot of things in the past two months that normally would have me at wit's end. I am upset about them but I'm not depressed or unable to cope with them.When I first started on **Armour Thyroid**, I felt fidgety and hyper. My stomach twirled like I was nervous - but I wasn't. I thought I would have to stop it but the symptoms all passed and now I feel no side effects at all from it. I take two 60mg. tablets a day, one at breakfast and one at dinner. I recently had blood taken to be sure I am on the correct dose. I won't switch back to synthetic thyroid medications unless I'm forced to!***My Viewpoint***If you suffer from hypothyroidism and synthetic hormones work well for you, that's great. If it ain't broke, don't fix it!  They worked well for me for years. But if you feel like, even on the "right" dose of medication, you still have symptoms or still just don't feel right, you may want to talk to your doctor about trying **Armour Thyroid**. I have learned that there are many groups of people who strongly believe that **Armour** is far superior to any synthetic hormone and are starting to petition doctors to provide **Armour** to patients as a viable alternative rather than a last ditch effort when all else fails. Whatever the case, my thyroid loves **Armour**. And boy, am I glad I switched. I feel 100 times better than I did. I listened to my body. Listen to yours. If you think something's off, it probably is!*** 5 stars!*** [1]: http://www.viewpoints.com/Levothyroxine-Thyroid-Hormone-review-caf9