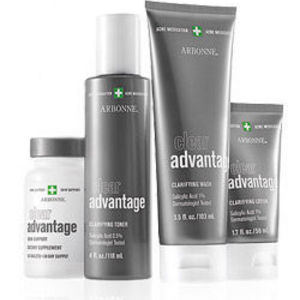 I give this product an 8 because I know of two people who have used it. I bought it for my son who has severe acne; it didn't help him much but it didn't hurt either. Another friend I know bought it for her daughter who had mild acne. She said it made a huge difference in her teenage skin and loves the product. Effectiveness As stated in my overall review, I only have experience with this product regarding two people. One with severe acne and the other with mild acne. The one with mild acne had much better results than the one with severe acne. Ease of Application This product is pretty easy to use. There are only a few steps. It easily rinses off and the cream goes on smoothly with very good absorption. Convenience If you have the time to go through the steps, this product may be a good choice for you. It is an easy routine and you can even do it in the shower. The pumps are metered so you get just the right amount. I would say it's very convenient. Side Effects I don't know of any major side effects. Sometimes it makes you have a tingly feeling but I believe that's normal. Immediacy It may take a couple of weeks to notice any difference or how well it is working for you to give your skin a chance to 'renew'.

I really like the acne system that Arbonne makes called Clear Advantage. I think that the results it provides are comparable to Proactive. I actually use it in conjunction with Proactive, I switch back and forth between the two. The difference between the two systems is that Arbonne Clear Advantage contains Salicylic Acid as it's active ingredient. It also seems to be a bit gentler than Proactive, while still working just as well. The face wash doesn't have any beads to exfoliate, but it still works really great. It also takes eye makeup off pretty well. Part of the system is vitamins, and if I take them on an empty stomach then I feel like I might be sick. As long as I take them with food though, I'm OK. Honestly I'm not really 100 percent sure that the vitamins really do anything, but I assume that they can't hurt. Again like Proactive, the Arbonne Clear Advantage acne system is a little pricey although I don't think it's really outrageous considering how wel it works. Effectiveness I didn't feel as if the vitamin supplement really helped all that much. The cream and face wash were nice, but I've taken prescription medicine for acne in the past and it worked much better than these supplements. I know that there's a difference between medicine and vitamins, but these just seemed kind of unnecessary. Plus they were large and hard to swallow.

I had high hopes for this line, but it definitely failed. A friend of mine is an Arbonne Consultant and recommended this line for my mild-moderate acne. I am 21 years old, and i have always had an occasional breakout every one in a while, even during my teen years, I had good skin. This past summer I started to break out more than normal, so my friend recommended Arbonne Clear Advantage. I bought the whole kit, and in a matter of 2 days of using it, I broke out so badly that my acne went from bad to worse. It dried out my skin, and my face turned to red around the "bad" areas. Around my chin, jawline, and up the sides of my cheeks, is where I was breaking out. I have been off of it for a week now, and my face is starting to calm down a little bit. Its not as red, and there are less bumps. However, my skin is still dry near the chin area. According to my dermatologist (who said he loves arbonne) said that was going through that "purging" stage, and that if I continue to use it, my skin will get better. I had to stop because my skin has never been this bad before, ever. I currently am on an antibiotic called Bactrim for my skin, I am also back on birth control because my breakouts may be due to a hormonal imbalance. Even though I stopped using the Arboone Clear Advantage line, I am taking the Clear Advantage Dietary Pills, and washing my face with Arbonne Fc5 Cleanser and Toner face wash. I just started with both of these, and hoping that it was calm my face down a bit. I was also prescribed Acanya, which i put on some of the bumps on my face. I don't put it near the irritated area on my chin because it will just dry it out more. I have only been doing this routine for a week now, and I am hoping my skin will get somewhat back to normal in the next couple of weeks after Arboone messed it up more.

I have tried Clinique, Phisoderm, Oil of Olay etc and none were effective on my adult acne. I have been plagued by acne since I was a teen and those people lied to me when they said I would out grow it! :) I started using this system about 3 years ago. Went to an Arbonne party and was pretty skeptical. But I tried it and in two weeks, I saw a huge difference. I still break out, but not nearly as much as I used to. My skin actually glows with healthiness. I do not take the supplements and I have done without the toner part, but the cleanser and the acne lotion is worth every penny. I tried skipping out on this for a few days and my acne came back - blackheads, white heads etc. I have very oily skin and use these products twice a day every day. I also do not wear makeup as that makes the problem worse for me. The cons to this product: It is sometimes drying in the winter and it is very pricey.

This summer I purchased the Arbonne Clear Advantage package. I love using these products, as they feel great and make my skin feel even better. I also really like the ever so slight minty fragrance. In the case of the face wash, the toner, the lotion, and the spot treatment - a little bit goes a LONG ways. I use about a dime size amount of the face wash each morning and that is more than enough to clean my face. After using this system for around six months I have noticed that I don't have as much acne breaking out all at once, but I still have breakouts consistently. This line is no better than the rest as it is does not solve my acne problem. However, I did notice when taking the dietary supplements that my breakouts decreased dramatically and my skin did have a chance to heal before breakouts started again. I need to get some more the dietary supplements to be sure, but I think that they really do help with my acne, which is a miracle! In the end, I really wish that each bottle had more product in it because this line of acne products is really expensive.

I tried Arbonne Clear Advantage when I was having trouble with breakouts.  I was in my early 30's and had recently delivered my second child, so my hormones were in overdrive.  Normally I don't suffer from breakouts and in desperation I decided to try this because it didn't have the same chemicals that are in normal acne products.  Unfortunately I wasn't really thrilled with the Clear Advantage.  My skin tends to be sensitive and this seemed to cause it to be overdry.  It also didn't really solve the breakout problem (but again, it was probably hormone related anyway with no real cure other than time.)   I only used it a couple of times before throwing it out.  It would probably work great for a teen who used it more consistently or if you tried it with the other products from this line.  I only used the cleanser, so that might have been the problem.  Anyway, this isn't a product I would use again.

Arbonne Clear Advantage Skin Care System for breakout prone skin or acne.  It is an easy-to-follow regimen consisting of dermatologist-tested, acne-fighting formulas that help to clear skin and prevent blemishes from forming with salicylic acid, plus an advanced dietary supplement that provides zinc and antioxidants to help support healthy looking skin.  I have used this system for 8 years and love it!  The salicylic acid is much gentler than products with benzoil peroxide and actually helps get rid of dead skin cells which can clog your pores.  The products consist of Clarifying Wash.  Deep cleansing gel like cleanser that contains 1% salicylic acid and a soothing botanical complex.  Comes in a tube...easy to use in shower.   Clarifying Toner, alcohol free toner that contains 0.5% salicylic acid.  Very gentle creamy toner.  Clarifying Lotion is an oil free lotion containing 1% salicylic acid & helps clear blemishes and prevents new ones from forming.  Acne Spot Treatment has 2% salicylic acid and targets breakouts.  You usually find the blemish gone in a couple of days with this product.  Skin Support Dietary Supplement works from the inside out to help control blemishes with key ingredients zinc, vitamins C & E.

I have tried many products in the past and will keep trying more til I find the right one. Clear Advantage is a good product but for the amount of money I spent on it, I am sure there is a product out there that is better. If you have the money by all means try this product. I do like how it leaves my skin feeling, but have found it I don't keep using it I will break out more. This product has not cleared my skin all the way so am looking for one that will. I hope it works for you.

Arbonne's mission is to provide superior skin care products that are pure, safe, and beneficial. This is a three step acne skin care system. Clarifying wash, clarifying toner and clarifying lotion. The acne fighting ingredient is salicylic acid. I started using this a month ago. At first I really liked it and it seemed to be working well, but things are starting to go down hill. I was using Proactiv before and this isn't the first time I've tried a different acne line and had to turn back to Proactiv. I like how it feels and I like the texture of my skin with it. I feel like my skin is so delicate when I'm using Proactiv and with this I don't feel that way. However, I'm starting to get little bumps alond my hair and jawline as well as an increased amount of black heads. I was hoping to get away from the harsher Proactiv and be able to use a more natural botanical system looks like I might be stuck though. If you don't have an acne line you are currenty using that works then I would give this a try. Arbonne has a 45 day money back gaurantee so there's not much to loose.

I cannot say anything more than this Clear Advantage System is amazing. The whole set comes with a Gel Face Wash- follow by the Toner- then end with the Acne Lotion. There is also a supplement that you take once a day that has grapeseed extract in it. Grape-seed extract has been proven to reduce the signs of sun damage and also reverse the signs of skin cancer. Get this for your troubled teens or get it for yourself. It really works. I am 26 yrs. old and I use this, love it!!!!