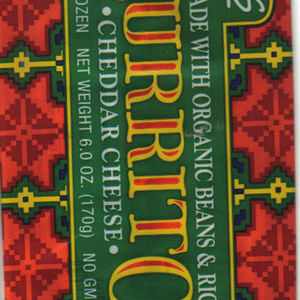 I just finished eating one of these! I love that the burrito is organic, vegetarian, and microwaveable. They taste much better than other microwave burritos, and are packed with beans! The burrito itself has a ton of flavor for a vegetarian burrito, I am a vegetarian and have tried all kinds of different vegetarian and vegan burritos, and these are by far the best. I love the sauce which has a spicy and almost sour taste that I love. There is one thing that I did not like about this burrito, the beans leak out all over the plate when you heat it up, which means you well have to eat it with a fork. I think the tortilla on the burrito had a lot of butter in it because it tasted a little oily and greasy, which is a taste some people might like, but not me. Overall I think this burrito is a good priced, healthy, and flavorful burrito, that most kids would love the taste of. As always, good luck!

Amy's burrito with chedder cheese is amazing. Like most of Amy's burritos this one is made from a organic flour tortilla, organic pinto beans, rice and vegetables. This particular burrito contains cheddar cheese, which makes it not vegan. One burrito serves 1, 310 calories and contains 580 mg of sodium. I really enjoy this burrito and would highly recommend this product to anyone who enjoys Mexican food. This frozen burrito is a much healthier version than most frozen burritos.

As with any organic product, price is generally an issue. I love organic foods in general, but specifically I tend to buy anything "Amy's" that I can, when I can. I don't buy these items on a regular basis like I used to, but if I feel like splurging a little, I'll pick up an Amy's pizza, frozen meal, or burrito. The taste is top notch and it's not greasy like other frozen burrito products. In general, burritos aren't necessarily touted to be a "health food", and this one isn't necessarily either, but I don't feel near as guilty eating an Amy's burrito compared to eating any other burrito.

I absolutely love Amy's products, and this bean and cheese burrito is a great solution for a healthy vegetarian lunch, with lots of flavor.  The cheddar cheese tastes fresh, and it is mixed with pinto beans and flavored rice in a fresh tortilla.  I love that these burritos are so easy and fast to make.  They go from freezer, to microwave, to being delicious.  One burrito has 300 calories and 9 grams of fat, and is made with organic ingredients.  These make a tasty lunch and are very flavorful.  I love that the cheese melts so you get a little cheese in every bite.

I bought these after reading in Self magazine that they were a healthy choice for a quick breaskfast meal (paired with an apple and some orange juice), and as gross as I typically find ready-made burritos, this one was actually very surprisingly tasty! I will be having these for breakfast a lot more often now.

I must admit that I am at a bit of a disadvantage here in that ... even though I have been eating Mexican food for years ... I have never before tried a **burrito**.  It's hard for me to compare this product with whatever it was supposed to replace but one thing I know for sure ... this *Cheddar Cheese Burrito made with Organic Beans and Rice* is yet another winner from Amy's Kitchens.  Although limited label space held back the customary tide of poetic rhapsodizing from the folks at Amy's Kitchen about this dish, one cannot help but detect the fine touch of the mysterious "Fred" who seems to have masterminded many of the great Mexican and Italian dishes produced by Amy's.  I have got to say that this is one of the best things I have ever eaten.  Its relatively small (6 oz.) compact size and shape meant easy warm-up and eating by hand as though it were an egg roll.   If care is taken not to overheat (I cut back on the time suggested) the crust is dense and chewy without being too hard. One burrito is a single serving which contains 300 calories with 80 calories from fat.  There are nine grams total fat, two and a half grams saturated fat, zero trans fat, ten mg. cholesterol, 580 mg. sodium, 43 grams total carbs, six grams dietary fiber, one gram sugar, and 11 grams protein.  Vitamins and minerals include 6% (D.V.) Vitamin A, 8% Vitamin C, 10% Calcium and 15% Iron.  The wrapper is marked with a "Kosher" symbol and most ingredients are organic and include:  pinto beans, whole wheat flour, brown rice, tomatoes, cheddar and Jack sheeses, safflower and/or sunflower oil, onions, bell peppers, sweet rice flour, sea salt, spices and garlic.  **TASTE TIP:** It may be that some burrito veterans might enjoy fresh salsa as a topping here, but like most Amy's products, the dish is good on its own and very substantial and satisfying.  In my own case, I finished up with a cup of General Foods Sugar-Free French Vanilla Dessert Coffee.