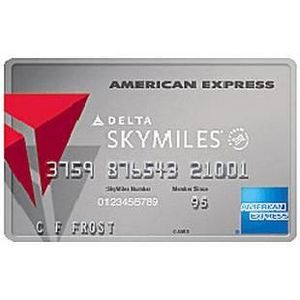 The Delta Platinum American Express Skymiles card has become worth a great deal less in the past year. It is still possible to earn up to 20,000 MQM's per year if you charge $50,000.00 on the card per year. The MQM's help maintain elite status. But the redeemable miles which are earned at a rate of $1 equals one mile is not very good. AMEX use to offer 2 miles per dollar on many catagories. Now only Delta purchases equal two miles per dollar. The biggest problem is that Delta has changed it's award chart. They have devalued the worth of a mile by requiring more miles for the same trip. A round trip from anywhere in the USA to Europe in bussiness class now requires at least 100,000 miles. That is up from 90,000 miles last year. However it's very difficult to find a seat for 100,000 miles. If you are willing to spend 200,000 miles (mid tier) you can generally find a seat. So you need to charge around $200,000 for one free ticket. That is not a good deal and dooesn't justify the big annual fee. Use this card only if you need the MQM's.

I've had my Delta Skymiles card for five years now, and have been very happy with it. I'm not a frequent flyer, but I've still been able to pay for one to two domestic flights per year using my rewards from this card. Here are the pros and cons, broken down. Pros: - Each Year you receive a companion ticket for a domestic flight on Delta. You have to pay full price for your ticket, but your companion's ticket is free (you must still pay for tax) - Get miles for every dollar you spend, plus bonus miles if you enroll in skymiles dining, skymiles shopping, etc. You also earn bonus miles for certain purchases. - Website is easy to use for viewing your bill, making payments, etc. You can also sign up for alerts reminding you your bill is due, etc - Delta now has a pay with miles feature, so you can redeem 10,000 miles for $100 off your ticket price. I believe this can only be done with certain flights, though. Cons: - Steep yearly charge of $150. - Many places don't accept American Express - It is becoming harder and harder to book tickets using your Delta Skymiles. Flights book up fast, and the amount of miles charged for redeeming a ticket have gone up.

We have had our american express card for over 9 years. We recently used our sky miles for two tickets for travel at Christmas time. Now we can no longer take that trip, due to our daughter is able to fly home from her military training for Christmas. They want to charge us $150 per ticket to redeposit our airline miles. What kind of good business practice is that? We have been a loyal Delta customer for over 20 years. I am thinking it is time to ditch the credit card and flying with Delta.

I've been with the program for several years now, and like it better than two others I belong to......mostly because of the double mile promotions they run every so often.  One thing that I don't like is that now you end up paying a lot more miles for the trips.  They are making it harder to travel on your miles.

The AmEx Delta Platinum is is my favorite credit card ever.  I charge absolutely everything on it and pay it off in full religiously.  This would not be a good card for someone who carries a balance, as the interest rate is high.  Also, the only reason to have this card is if you like to travel internationally, which I do.  The reason I say this is that the annual fee for the card is $150, and Delta is about to start charging for FF miles redemption.  If all you do is fly domestic, it means the miles aren't worth much, but if you fly first class internationally, the miles are worth over a nickel apiece, and that's more than 5% back, better than any other card.  You even get a lot of bonus miles, like 20000 for spending $50K in a year, which we always do.  You also get double miles on groceries, gas, home improvement, etc, making that a 10% return.  Also, the customer service is terrific - they have solved problems for us, got our money back when we've had trouble with a retailer, etc etc.  I can't say enough good things about this card!

I have been using delta sky miles from american express for years. Have gotten a lot of free trips. Also got companion free trips when I do not have enough of points. So either way I am only paying for 1 fare for 2 people.

I use my credit card everywhere for everything.  The points add up so quickly.  I haven't paid for an airline ticket in so long because of mileage points accumulated.  Besides the rewards you also have the guarantee of AmEx when you purchase.

You should only carry/use this card if you intend on using the miles for international travel on a partner airline.  We used Delta FF miles to book a flight from Boston to Bali on partner airline Singapore Airlines.  We flew first class on Delta (Boston to Los Angeles) and business class on Singapore (Los Angeles to Singapore to Bali).  The business class on Singapore was far superior to the first class on Delta - night and day.  We figured if we had to pay for the business class tickets on Singapore, it would have cost us in excess of $10K, so the use of the Delta FF miles was well worth carrying and using the card despite the $135 annual fee.  If you fly often on Delta and are a medallion member, it might make sense to carry and use this card for the bonus miles, but due to recent cutbacks in capacity, it might be a lot harder to use your hard earned FF miles to book travel.