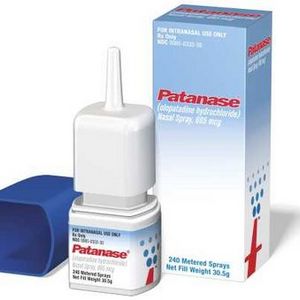 I have been battling a strange, one-sided congestion in my left sinus for two years. After seeing an otolaryngologist last week, I was prescribed the nasal spray Patanase. I can honestly say I noticed a huge difference within one use. It feels as though there is finally a bit of "movement" going on up in that cavity. I had previously tried over-the-counter sinus and nose sprays which did absolutely nothing to relieve the blockage. Using the product is very simple. You just remove the cap and spray the medicine into one nostril. The nasal device is very comfortable to use and the pump works fine with just one hand. Now the downsides: As I imagine with any nasal spray, this stuff will eventually drain into your throat. Not a big deal except that it is really bitter and horrible tasting. I was also disturbed to read that "hole in nasal septum" is also listed as a potential side effect! (Simply spray toward the outside of your nostril to avoid this.) Finally, even though it has produced some change, the effect seemed to level off almost immediately. I have only been using it for a week though, so things may improve.