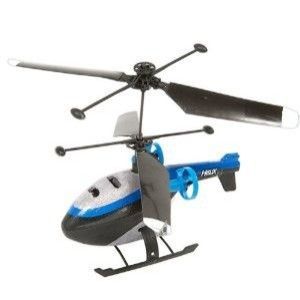 Great toy for my 50 year old kid.  But I would not reccommend it for young children or for use around dogs.  My dog hates it and tries to attack it when my husband plays with his helicopter. They are very fragile looking.  The rechargable battery does not last to long.  He can fly it for about 15 minutes before the battery starts to give out.

My son saw these on tv and HAD to have one! We got him one and it didn't last 2 weeks. The motors and small and the foam busts. He had fun with it after he learned to fly it. He later received another the next year for Christmas. It lasted maybe a week. I really don't think that they're worth the money and would recommend them to anyone.

A remote-controlled helicopter... my husband swore our three-year-old son wanted this for Christmas. Santa should have known better. The second it was unwrapped my husband annexed it under the pretense of "teaching" our son to fly it. I put my money on a lifespan of approximately thirty seconds. Surprisingly, here we are two months later and it's still flying, despite numerous encounters with the walls and ceiling.  We've had remote-controlled helicopters before, and I would largely lump them all in the "junk" category. The Air Hog seems better than most, both for endurance and ease of control. My husband navigates it fine, of course, but even our three-year-old can manage a decent landing (when hubby will hand over the controls, that is).  It is tiny, kind of like a large flying cockroach, and it needs recharging after about three seconds of flight. The best thing about this toy, though, is that even if its breaks tomorrow I would still deem it a worthwhile Christmas gift -- something both my big and little boys enjoy doing together.

My 7 yr old got the helicopter with the camera. It was the one thing he wanted most for Christmas. What a big disappointment! It simply stopped working the first day he played with it. We took it back and of course could not find another one. This toy is rather expensive and I expected it to last a lot longer than a day.

I bought one of these for my husband for his birthday.  Let's just say - he didn't read the instructions and was crashing the helicopter all over the place.  Finally, after my advice, he read the directions, and the trouble shooting tips.  AMAZINGLY enough, the helicopter survived those first horrible test flights.  He can now fly it like a champ, just like the commerical showed.  He even took some pictures with it.  I think you can take video, but I guess he hasn't gotten that part figured out yet. One problem we did have was the LED on the front went out.  It could have been from one of his MANY crashes, but it no longer glows green or red.  So, you don't really know if it's taking pictures or not.  Not that big of a deal since my husband mainly just wants to fly the thing. I'm so glad it worked, and held up well. I was VERY nervous about buying one of these.  As a kid, the remote toys NEVER worked like they should.  But this one?  It worked like a CHAMP!

We have had several different variety of Air Hogs come through our house over the years.  Not a single one has worked for more than a week.  The foam breaks when they crash, or the wires become disconnected and no longer deliver power to the motor, or some other incident that I feel they should have survived, but they didn't.  Imagine the disappointment each time for the kid at the controller to have their new toy break.  SOmetimes they had saved up their own money to buy one and it always ended it disappointment all too soon.  I finally refused to buy anymore and the kids realized they didn't want to gamble their money either.  Then my son got a Hovercraft for his birthday.  He was excited to try it, but was pretty sure it would break.  It was hard to get to work correctly and make it "hover".  Then the spinning blades cut his finger.  So out of an estimated 5 or 6 tries with AIr Hog products we have never had a satisfactory experience.

I recently purched an airhogs rd helicopter sharpshooter model from target. I loved this toy, it was easy to handle and very easy to manuver and hovering was a peice of cake.  It is the only rd helicopter on the market that shoots projectile "missles", which were suprisingly easy to aim and shoot while flying.  I broke my sharpshooter after onltwo days of having it, so I called up customer service to see if I could order replacement parts for the ones that I broke but unfortuantly they do not sell or carry replacement parts ( at least for this model). So I was offered a replacement of my broken toy for no charge!..  The sharpshooter was on backorder so I was offered the reflex as a replacement instead, which I accepted.  The customer service staff was so helpfull and processed my replacemnt the same day. I was told that I would receive my replacement within 5-10 business days and I cant wait for it to get here!   the one they are replaceing my old one with costs almost twice as much as the one i bought score!

I bought the **Air Hogs- Reflex **helicopter for my husband for Christmas. He is a kid at heart and I knew he would enjoy it. Well, it was better than expected. Once out of the package and charged for about 30 minutes, the fun was just beginning. He has played with this every single day. I use the word *play *very lightly, because he does not think of it as a toy. It must be very easy to operate because my husband does not have very good hand/eye coordination. He was never very good at playing Nintendo games with our kids, but always had an interest in remote controlled vehicles. It appears so easy for him to control the **Reflex**, that after the first day he was practicing different strategies. Within the first week he has learned to maneuver all over the whole house. It has crashed several times and the blades are so flexible that you just have to twist them back into their original position. He also found a U-Tube video on line from Air-hogs that helped him in the beginning. I think he watched that while it was charging. I am sure of one thing, he is already looking into getting other Air-hogs helicopters too.

Got Air Hogs for my 4 year old grandson and my 30 year old son for Christmas. Both "boys" had a blast with them, but the 4 yr old was soon flying circles around his uncle ! If you've ever used a remote to control any type of vehicle, you're in business. These planes look very fragile, but are surprisingly durable. We had many crash landings and flew into walls, people, etc without mishap. The directions are rather detailed and lengthy, but as with most of the male species, they didn't bother to read them. It does require 2 AA batteries even tho the package states that batteries are uncluded. What they mean is the rechargable battery in the plane itself. The plane only flies about 5 min before needing to be recharged. A handy green light indicates when charging is complete.

***My nephew got one of the helicopters for a birthday present and we babysat for him shortly after he received it.  My husband and I ended up playing with it just as much as he did.  My son will now be getting one for Christmas.  It was hours of entertainment, and even though the item was pretty lightweight and looked like it could break easily, it ended up being pretty durable.  Especially considering that my nephew has six brothers and sisters to mess with his toys.  I would recommend this toy to any child between the age of 5 and up.***