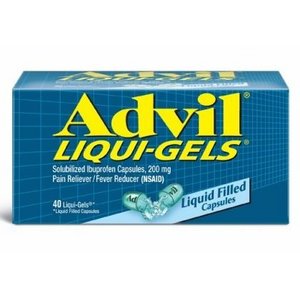 I have chronic headaches and this works the best!

I get headaches every day and I need relieve fast. Advil works better than other brands I tried. Its also faster.

I like Advil for pain relief. It seems to help my tension headaches better than other over the counter medicines. I really like these liquid gels, they are small and very easy to swallow. I find two of these works well, if you get an upset stomach easily I would try one. They start working quicker than the normal tablets, maybe it is just my imagination but for me they work better. My pain is gone usually within 20 minutes or so after taking. I do not take with food and my stomach is fine with these pills. Effectiveness They work very well at relieving pain and relieving it quickly. For me they do not work so well for fevers or flu related aches, but I love them for headaches or muscle aches. Ease of Use The pills are actually really small and soft since they are liquid gels. They go down very smoothly. Immediacy For me I start getting relief in about twenty minutes. I have full relief from pain in less than an hour and my pain stays away for several hours.

This is my favorite pain relief. I have always liked Advil better than anything else. When I have pain or a headace I usually try to relieve it naturally first. I use essential oils, drink lots of water, get extra rest, etc. But if that just doesn't cut it I immediately go to my Advil liqui-gels. The gels work much faster for me than the tablets or capsules. I usually feel relief within 20 to 30 minutes. This is much faster than Tylenol, Excedrin, or Aspirin. Advil works great for me and I always keep some in my purse and I'm sure to pack some when we go on vacation. While at the beach last week it was a good thing I had some as my husband was having back pain from the hotel bed. Thankfully the Advil Liqui-gels helped him to be able to enjoy our trip. I would recommended these to anyone who has headaches or pain. They work quickly and don't have negative side effects (unless you take too much). Just don't overdue it. I usually take 2 but if my headache is bad enough I'll take 4. Don't take any more than 4.

I have always been a fan of Advil for joint and muscle pain. In fact, Advil liquigels were a go-to if I rolled an ankle, slept funny and had a crook in my neck, overextended my knee or wrist, etc., the biggest advantage being that the liquigels allow the medicine to get into your system faster than traditional caplets. However, I found that the liquigels were upsetting my stomach quite regularly. Having celiac disease and knowing that certain other liquigels were safe, I presumed that Advil were as well...only to find out that I was wrong. Advil makes a statement that people with celiac disease should use Advil caplets, not liquigels, as the liquigels do contain gluten. Why they aren't made with traditional gelatin like others is beyond me. Maybe they thought it was more important to be vegan friendly than gluten free friendly. Regardless, it was a huge disappointment. I am still holding out hope that they will reformulate, but that remains to be seen.

Advil Liqui-Gels is an anti-inflammatory pain reliever. Any anti-inflammatory tends to make my stomach sick and cramp. These compared to the rest in that aspect even though the package said gentler on stomach. They are expensive compared to most pain relievers I buy. They work about as good as other pain relievers in their category so to me they're really not worth the extra money. Effectiveness I suffer from back pain from osteoarthritis and get migraine headaches about a week out of the month due to hormone changes. These did help with the pain but not as well as Excedrin or the Equate version. Ease of Use These are little green capsules. They are larger than I would like. I though the gel capsule may be easier to swallow or go down my throat better but they really didn't. Immediacy The fast acting claim really drew me to the product. I like to take something as soon as my headache or pain starts to prevent a full on migraine. However, sometimes I'm out or it just comes on sudden and I need relief fast. These took about a half an hour to kick in and that's what it takes the other pain medicines to work for me.

Advil Liqui-Gels are great. I prefer these over the normal caplets for sure. The liquid gel pills work so much faster than the normal pills do. I take these sometimes when I have a bad backache or toothache. I have tried many over the counter pain relievers over the years for things like backaches, headaches, earaches and such and Advil has always seemed to work really well for those things. I try not to take medicine often, but if I do, I always want something that will work good, but work fast. I know they work faster, but I cannot stand the taste of the liquid medicines, so these gel pills are perfect. Ease of Use These pills are a little larger, so they are harder to swallow. Really, they are slick so they are easy to swallow, but I get a little nervous with bigger pills, so I think it may just be all in my head that they are harder to swallow. Immediacy These pills work ten times faster than the normal pills do. That is definitely one of my favorite things about them.

I love Advil and use it all the time for various injuries, as well as for cramps and such. The Liqui-Gels are the best thing ever to happen to Advil since the little orange pill was released! These work incredibly fast, which is essential for everything from muscle strains to menstrual cramps. I've found that these start to provide relief within about half an hour of taking them. I usually only need to take one at a time and they do their job beautifully. Even at a regular dose of two gels this does not give me any side effects or tummy discomfort. I love that these are super easy to take, and they act fast. They are a constant in my medicine cabinet. The only thing that I don't like is that they do tend to clump together a bit in the summertime. Not enough so that they are actually melted together but enough that I need to shake the bottle before dispensing in order to separate them. Overall these are an excellent addition to any medicine cabinet!

I love these Advil liquid gel pills for most of my general aches and pains. They are fast acting and small enough to take easily. The liquid form of the medication is faster acting than the comparable solid pain relief pills. I use this over-the-counter medication for headaches, muscle aches and and pains from random accidents such as hitting my head on the heating control compartment if standing up beneath it too quickly to avoid it. I am, at the current time, unable to take the Advil liquid gel pills because I am six and a half months pregnant and pregnant women are advised to avoid taking any form of ibuprofen while pregnant and Advil is ibuprofen. These pills are easy to take and have no taste to them so they can be taken without need for a drink to wash them down. This general pain reliever is very affordable, comes in various size containers and has regular coupons available both in print and online.

I gave this product a "9" because of my recent dental surgery and the relief it gave me without having to take pill after pill after pill. I was very pleased with it's effectiveness. Effectiveness It WORKED!! I had extensive surgery due to a jaw infection and, after surgery, was given hydrocodone that I didn't want to take because of the feeling it gave me so, instead, I opted to try Advil Liquid Gels and found that the relief was exceptional and I didn't feel strange. Ease of Use EAsy to swallow and only twice a day. I love that! Tylenol required taking too many doses and I worried about the use of the product on my liver. Motrin also required more doses but would have worked well, too, but I wanted fewer doses and efficacy. Immediacy It did take about 20 minutes for the product to begin it's job but once it was in my system, I didn't allow myself to "get behind" and had relief the entire time I needed it. I was very pleased with this product for my dental work.