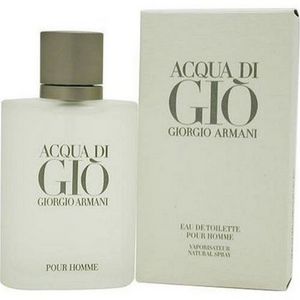 I had almost forgotten how much I like the wonderfully fresh scent of **Acqua Di Gio by Giorgio Armani for Men** until very recently. I was seated by a man I didn't know at a luncheon banquet I had to attend, and he smelled heavenly! It bothered me for hours that I couldn't recall where or on whom I used to smell the fragrance, but it finally hit me...One of my friend's husbands wore the cologne very frequently. They moved to Ohio to be near their families a while back, but there was no mistaking that the man at the banquet was wearing what was 'Adam's" signature scent! I called my friend and chatted with her for a short while and then told her my story about the man who smelled so nice, just like her husband always had, and asked her what the name of the cologne was. She told me it was **Acqua Di Gio by Giorgio Armani for Men** and I then remembered seeing the bottle on their bathroom shelf many, many times. The wonderful scent is unmistakable and smells so good! This cologne has one of those beachy, fresh, airy, very manly scents that I am so very fond of. Crisp and clean, and extremely sexy and appealing! Yummy in every sense of the word! I can still smell it as I am writing this review! That's impressive! This product's description is as follows: *Fresh, transparent, sparkling...A resolutely modern men's cologne, a cool ocean breeze blowing over warm sand; emerging from the waves, the sun and the earth of the volcanic Mediterranean island of Pantelleria, where Giorgio Armani has his summer villa. The success of Aqua di Gio, Gio being Armani's nickname used by family and friends, lies in its transparency, its contemporary expression of masculinity, and its serene aromatic aura of herbs, woods and marine notes; but also the brilliant black & white advertising images which have tapped into our collective unconscious, making it the epitome of the fresh, watery, exhilarating cologne for warmer weather and casual wearing. After so many years in the market with no signs of its popularity waning one bit, Aqua di Gio is considered a sales triumph for a reason. Recommended Use: Casual wear.* **Top Notes:** *Bergamot, Lemon, Lime, and Mandarin.* **Middle Notes:** *Coriander, Marine Note, Freesia, and Cyclamenr.* **Base Notes:** *Cedar, Patchouli, Moss, and Musk.* Casual wear, formal wear, office wear, or bonfire wear...it doesn't really matter as far as I am concerned! I complimented Adam, my friend's husband, almost every time I saw him because he always smelled so good to me! I'm a huge fan of clean, fresh, light, airy, sexy, very manly fragrances and this one has all of those things going for it! This scent is amazing and I love it and very highly recommend it! 5 stars!!!

I just love when my husband puts on this cologne. It makes him smell so good. Its not too strong on his skin nor on his clothes. All he has to do is spray it once and it sticks to him and his clothing with no problem. It especially smells good when he gets out the shower and puts it on. I told my husband that this is one of my favorite colocgnes that he wears. I said to him that this cologne is the best for him because its not over powering. He likes this cologne so much. It usually lasts him almost 2-3 months. he doesn't uses alot of it. Theres no need to use alot of it, I told him the way you use it you should always use it that way. My step-son be saying to my husband o daddy tyat smells good can I have some? So my husband says yea. my son woukd say I want alot on. I be telling him you dont need alot on. You just need a little bit. So now my step-son likes this cologne to. I told him i will buy him his own personal cologne.

I admit that I am a cologne fanatic. I can fall for a man based on his cologne. If a man smells awesome, my hormones go crazy out of control. Because of my love for colognes, I consider myself a cologne connossieur. I enjoy finding the best smelling colognes and recommending them to my guy friends. That way be both win. My guy friends can smell amazing and I can smell that amazing-ness! Aqua Di Gio is the cologne I recommend the most for guys. The smell is truly addicting. All the ladies love Gio, honestly! It isn't too overpowering either, which adds to its charm. Armani always comes out with great smelling cologne. If you don't want to pay the high price, there are off-brands of Gio that smell very similar to it. The only downside to the cheaper versions are that they don't last as long.

I have smelled a lot of scents in my day, and there have smelled a lot of bad scents.  Most male fragrances are not something that I find at all attractive or interesting.  However, I love this fragrance.  I'm not sure what it is that makes this smell so good, but when a man wears this fragrance I just go crazy.  It is the best fragrance that a man could possibly wear.  I love it!  I know that it is an older fragrance, but there is a reason that it is still around after so long because it really works!  So to all of you men out there that are looking to attract a woman this is the one to wear.  The smell is so good it just makes you think all kinds of dirty thoughts!  I make my boyfriend wear it.  I love this scent so much that if they still make it when my son is old enough to want to attract a girl this will be the fragrance that I have him go out and get for himself.  Try it out for yourself and see what I mean.

There aren't too many cologne smells that I really like but when I find one I just know it and I'm hooked.  I have to have it.  From the first time I smelled this Aqua di Gio I loved it.  It is a strong smell but not an overpowering smell and it lightens up as you wear it which I love.  I don't like that it costs so much money.  I do think it is overpriced but unfortunately, like  said once i like it i have to have it.  Also, I think the women really like it because I am always getting compliments when I wear it!  It just has a sexy smell I guess.  Whatever the reason I love wearing it and I plan on continuing to wear it until I find a smell i like better which I can't imagine.  As I saw a previous reviewer state, I think that this would make a really great gift because it is the kind of thing a lot of people like but would not necessarily buy for themselves because of the somewhat steep price. This is a definite yes from me.

It is virtually impossible to find a negative about this cologne to critique about. When donned lightly, as any cologne or fragrance should be, the sweet scent gently caresses the nostrils, lightly saturating olfactory receptors with hints of decadence. This fragrance is sweet - not fruity - and not overwhelming to the senses as some other colognes might be. The glass bottle it comes packaged in also looks really nice and keeps the liquid from evaporating quickly. I only use this for certain occasions and sparingly, so it will last me for a long time. For those whose use is more frequent, this may vary, but I would think that it could easily last a year's usage. Pretty much any girl will like this fragrance. The guys do too and therein lies the problem. It's popularity makes the scent fairly ubiquitous, which may detract from its quality in a sense.The price may be a little higher than some other brands, but it is worth it.

Purchased this for my husband last Christmas. I love the scent it is very clean and I love it when he wears it, He loves the smell also. Not to strong just the right touch. If you are looking for a good clean scent this is the one. Your significant other will love it.

Aqua Di Gio by Gergio Armani is absolutely awesome! I know that many people see that its made by Georgio Armani and automatically assume that it is super expensive because it's designer, but thats not the case. Before you jump to conclusions about it's price, you should know that it smells great and guys, the women love it! While it may not be the cheapest thing out there, I believe that you get what you pay for and I'm willing to spend a little extra to get quality. With this cologne, it's easy to smell good while still smelling manly. It's not too strong like many other colognes out there on the market. It provides a good, clean, rich smell at a decent price. This cologne is perfect because it is suitable for both everyday use and still smells good and expensive enough for those special ocassions as well. I would recomend this fragrance to anybody. Ladies, this makes a good present for a father, boyfriend, or even brother.

I would highly recomend this for any man. I gave it as a gift to an ex boyfriend and love it on any person. I can always smell it when someone is wearing it and it smells wonderful. He received many compliments and I know many girls love the way it smells on men as well. This is a perfect gift and scent for men.

Wow.  My absolute favorite cologne.  Well, what is pretty obvious when reviewing perfumes is that its really up to the person who wants to buy it to smell it themselves and see if they like it.  So I'll try to talk about something useful other than how it actually smells.     Ive been using this cologne since 2003.  I'm a 23 year old guy right now, so since I was about 17.  From then until now, I've had females constantly complementing me about the cologne, talking about how good it smells.  I feel like it is some magic formula, because I can assure you guys, this will help you get her.  My ex told me that every time she smells this cologne on someone else, she thinks about me, in a very good way.   The quality of the fragrance itself is very good.  I've had the same bottle for a few years now, and it has not evaporated much, if at all.  When I spray it on my clothes, I actually like to keep the shirt unwashed for another time at least, because the cologne actually smells BETTER to me a few days later, as it ages.  And the scent stays on you for a long time, so it is certainly high quality.