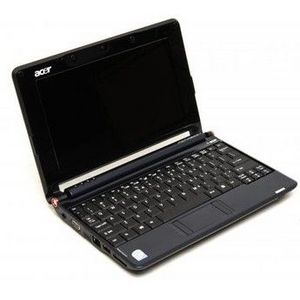 This laptop is the grestest that acer has come out with. good design, great long lasting battery. its very easy to use and user friendly. The speed is great and system is easy to use. i would recomend this laptop to my family and friends. I would buy another one if i could.

I have had this notebook for years, I am now going into my senior year of high school and have had this laptop since the beginning of middle school. It has served me well for all those years for both homework and for entertainment purposes. All this time, however, and it has had minimum problems, there is only one time that I can remember when the system completely shut down or crashed. I was able to fix it, however, and it was up and running once again. (: The notebook isn't exactly child-proof, but it can be easily reassembled if one of the keys were to pop out, just pop it back in. For the price, a lovely piece of technology. Ease of Use Every notebook, laptop, and tablet has its complications as with every piece of technology, but once everything is figured out, it runs well and smoothly. There is a limit on the personalization of the notebook (uses windows starter), but other than that, all is well. Battery Life The notebook, for me, lasts about three hours unplugged which is good considering its size and age. Support & Service I can usually figure things out on my own, but I'm sure if I needed help, acer would be right there to assist? Speed/Performance It has its days, again as with every other piece of technology out there, but it is usually a functioning and speedy system. Design Comfortable, light weight, convenient, and compact. It took some getting used to, but now I find it the most comfortable layout on any laptop that I have used in the past. Durability My Acer Aspire One has been through hell and back, and it still functions just as it did on that first Christmas day that I had received it.

I would rate this laptop as a 4 out of 5. The only reason being is that sometimes it's a little slow...BUT it is meant to be a small computer and doesn't have a whole lot of memory. But she does play all her games she wants to play online and she does have other games downloaded on it. We store pictures and music on it for her. The built in webcam is good for us to use when she wants to skype with her cousins in a different state. Overall, great buy for the price, and recommended for kids or pre-teens also.

If I only knew how slow this computer was I do have never purchased it for my sister. She uses it everyday for class and homework and has to keep the charger connected because the battery doesn't last past an hour. I had to go buy another laptop for her. What a waste of money.

I bought this laptop because i didnt have a lot of money and i was in college at the time.  It is slow!  The features it comes with are worth the 500 bucks i paid for it- thats for sure.  i enjoyed the dvd player and microsoft products.

Htis laptop has worked well for over a year now. I upgraded to Vista pretty smoothly. It took Acer a few weeks to get some of the drivers up, but they're all there now.Tech support is lousy - good luck calling them or getting any intelligent response form their online tech support options. I guess that's why the prices are good - the machine is good, but they really skimp on tech support. Thankfully I have only had to use it limitedly.

This is a great little note book. It came with a mouse and a case which was all very nice and compact. I enjoy the size of it, though that took some time to get used to. I like that the mouse is small but comes with a scroll since I scroll more on this little labtop than on a big computer. It slips easily into a purse or bag and makes business trips where you can have everything at your fingertips when you look like you have nothing at your fingertips! Very handy. It is also nice to have in your living room for company though people do have access to most things on their phones now I have seen company ask for use of a computer and it does not seem like they are putting you out as much when you offer them this little 'extra' on you have sitting there. The speakers are loud and handy to use. You can carry it around as you watch online things because it is so small but powerful. I am noticing a decline in the battery now that it is about 3 years old but I try to keep in plugged in unless i'm going somewhere.

I bought a Acer Aspire One Mini Laptop recently.  It comes ready for WiFi  and connects on-line thru ethernet- .This machine operates under windows XP, home addition.  One can plug it into various things with three USB ports, but uses, no CD's... which in my case would mean I would have to buy a different printer to use with this mini-laptop.  My current desk top computer and printer are fine... Thus the thing I really need is a small storage device that would plug into the mini-laptop to transfer any/all info. I'm shopping around to locate cheapest price. Another great thing is how small and light and portable this is. And I got wireless oked in the house so now I have more freedom. Plus, of course, I can hook into the net at other places that offer WiFi access, such as the local library, and a book store, coffee cafe house, local eatery. One should be able to aquire an Acer Aspire One in five different colours. I got mine at ABC Wearhouse and what they had in stock was white... I believe they come in white, black, blue, pink and golden brown. I like this little laptop, it runs fast and is easy to use. One really should get computer glasses to use with this... the screen is approx 8" - It is small. Nice battery, lasts approx 6 hours, and it did come with plug in for electrical power.

I absolutely hate this computer. First of all, it is not mine, and it was only bought to be used for going on the internet, which is the only thing it is good for.  I use it all the time; it is certainly much better than my seven year old Dell desktop.  But it's not what you might want. This computer has only about an hour and a half of battery life, and the screen is visibly brighter when you plug it in.  I don't know if it was just the way it was bought, but this thing came with pretty much nothing on it. Just the bare minimum, and a 60 day free trial of Microsoft Office 2007.  I had to install the old 2002 version onto it. And I use Word a lot.  When I noticed that the internet wasn't really up to speed, I decided that deleting my documents would help.  All 300 of them. And that was just the Word documents. I also deleted videos, pictures, music, and a bunch of other stuff that I didn't need.  It did help speed up the computer a bit, but I shouldn't have to delete files that I may or may not need anymore just to keep some computer working properly. Another thing that I don't like is the placement of the wireless connectivity switch.  It is located on the front edge of the computer.  If you happen to have the computer on your lap (because it's a laptop), and you move, or rub against it, the computer will disconnect from the internet.  Even though you only have to flip the switch again to make it reconnect, it is quite annoying and it does take a few moments to find a signal and be back to normal. What I hate most of all actually occurred a few moments ago.  You see, this computer really can't handle much.  On Internet Explorer, you can open tabs, which are like little mini-windows in one window.  Sometimes, if I have maybe seven tabs open in a window at once, a message will pop up that says, "Internet Explorer has encountered a problem." Usually, I don't care.  Just that tab will close and then I can open it right back up. But this time, I didn't have any tabs open. In fact, I was finished writing this very review.  Except, I was finished.  I had well over 2000 characters written.  I was just about to press "Publish," when that horrible message popped up, and shut the whole window down.  And there was nothing I could do about it.  No way to retrieve it. I just had to rewrite it. (I don't know if it was a problem with Internet Explorer, but I'm reviewing this laptop as a whole.) Even when having multiple windows open, the computer freaks out, and may encounter an error.  If I'm lucky, it will just be slow switching between windows. Also, I do like gaming, and would *love* to venture more into the PC gaming world.  I could probably name ten games that I would like to try.  But, I would *never* try and put a game on this computer.  First of all, the system requirements for most games are way higher than what this laptop can handle.  Also, I would be afraid that if I did try to install something, it would freak out, go into self-destruct mode, and blow up in my face. If you just want to go on the internet, and maybe just check your e-mail, this may be the computer for you.  If you want to play games, do your homework, and not encounter errors in all programs, I would probably stay away.

I bought this netbook in december of 2008. When i bought it I had a desktop and the area I lived in had gone thru a few months of brutal weather. We were under tornado warning and I couldnt think of how to get the desktop to the basement in a hurry. This machine is very light and portable. I like the size of the keyboard, The video quality is surprisingly good and the battery life is pretty good too. The sound card has a little to be desired. I have problems with streaming audio from the internet and no matter how high I turn the speakers up, they are too weak. I usually end up plugging in my isymphony bag speaker to the machine. There is no volume control at that point but at least the sound is loud enough to hear. If you are accustomed to a large monitor this will have a learning curve for you. It took me a bit to get used to a smaller viewing area. It took me a few days. I use this netbook for things like web surfing, email, etc.... When bad weather strikes our area and we go w/o power for a few days I use this machine (from where I am typing this review) for watching movies. I havent used it for gaming, I would imagine that the processor can handle some games but not all games. I was in the computer business for 20+ years and was never a fan of Acer anything until I came across this machine. I am very delightfully surprised with it.