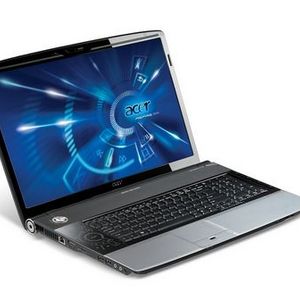 .  The Acer Aspire 18.4" laptop is attractive, easy to use and comes with many useful standard features.  The Bio-Protection fingerprint reader is easy to set up and works well without any "glitchy" reading problems.  You can use this feature to store passwords, so you don't have to remember them all.  When you go to a website requiring logging in, you will be prompted to scan your finger and it will log in for you, this is one of my favorite features!  Who can keep all those internet passwords straight?  The display is large and clear, so it is great for watching movies or playing video games, I do both a lot.  Keep in mind this laptop is huge, which I love, but others may find it to be too big.  Finding a case for it may be a bit of a challenge, but there are some online.  The webcam is very good quality and takes excellent pictures.  I have used it as a webcam and found it to be slightly better than average.  Depending on where you purchase this laptop, there may be customizable options, such as hard drive size and memory.  I was sure to have DDR3 memory, 1 gig of dedicated graphics memory, (which I would highly recommend), as well as a HD DVD player/burner.  I have the 2.53Ghz Duo Core processor which can handle anything I throw at it.  I can hook up a second screen and watch a movie on my laptop while playing a graphics intense game on the extra monitor with no problems.  This computer is an excellent choice for a gaming enthusiast, movie watcher, or graphics design student, because of the large crystal clear display, fast processor and Cinematic surround sound.  As someone who enjoys photography as a hobby, I really appreciate being able to see my new photographs so clearly on this beautiful screen.  If you are someone who just checks emails and does some word processing, this may be more computer than you need.  There is one downside: Acers normally come loaded with a ton of extra software.  I knew this ahead of time and had a computer geek friend clean it up for me.  Also, the only operating system option when I bought this laptop was Vista.  Now that I have used Vista, I actually like it fine and have not had any problems.

Acer is continuing to improve its brand image in north america and they hit another home run with Acer Aspire 8930. This laptop contains a core 2 duo processor from Intel so it is not the latest processor from intel but still not too old processor either. It is feature reach in other specs too. The laptop I bougt containg Windows Vista operating system but I bought and installed Windows 7 operating system on it. It contains 4 GB DDR3 RAM, which is awesome because Windows 7 operating system works flawless on 4 GB ram and in near future this is more than enough memory requirement for anyone using the laptop for standard home use.  Another plus point is its big screen size. It contains screen size of 18.4 inches which makes everything look so great on this laptop. With this big screen size laptop one drawback you get is the weight. This laptop is 9 lbs in weight so definitely not the lightest around and it is its one drawback. Also, it got a very generous hard drive space as it contains 320 GB storage space. Overall very good laptop at affordable prize.