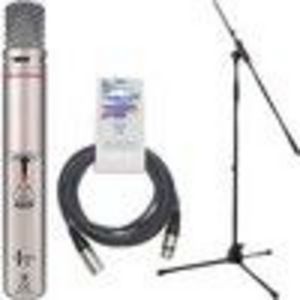 After I had been performing for a few years, I decided to expand my capabilities by staring to accumulate a sound system. Most of the venues I had been gigs I had been playing either provided a sound system or it was a small enough crowd so that I didn't need one. However, I knew I was going to market to festival gigs and for those, I was going to have to provide a sound system. A full-blown sound system was going to cost more that $2,000, with mikes, mike stands, a mixer, speakers, monitor speakers and cords, and I needed to have a powerful enough system to support a crown of at least 300. At my rate of gigs, it made a lot more sense to accumulate the system over time, using money I saved from each gig. I bought a passive (non-powered) mixer, meaning that the speakers would have to be self-powered. Then I bought a small monitor speakers, the Fender 1270P's, which were enough for sound for a group of up to 100 people. Next, would be the mikes. I was looking for versatility in the mikes. For my band of choice, myself on sax, a guitarist, a bass player and a drummer, I would need 1 mike each for me and the guitarist and the bassist. Then, the drummer would get 3: one on the bass drum, one on the tom-toms and one on the cymbals. And, I soon learned, when it comes to mikes, it certainly is not "one size fits all". I saw some product reviews of this unit, the AKG C1000s, and they mentioned that this microphone could be used for miking vocals, guitar, high drums and sax. I found a twin-pack new on Ebay for less than was available online at the time. The price has dropped a bit now to $109. In my fist big gig, I used these for the guitar, a busy, boisterous player and for me on soprano sax, a bit more reflective. I used the adapter on each which changed it from a cardoid to a hypercardiod microphone. That refers to the sensitivity. I also attached a polar pattern converter on the soprano mike, which is billed as making vocals more intelligible. Both mikes worked extremely well. I also used the soprano mike for announcements and that worked well. The microphone needs phantom power from the amp or a battery in order to work, as a condenser (powered) mike. My own mixer and the powered mixer I rented for the gig both provide phantom power, so that is not an issue. Since then, I've gotten wireless mikes which I use on my saxes. However, I've used this model when I've needed a mike for announcements. This is a solid microphone. It was an excellent choice for me. I recommend it highly. Please check out details on my upcoming LIVE CD release at www.jazzobsession.comAny reader who has questions can contact me through www.jazzobsession.com or my Viewpoints member page.