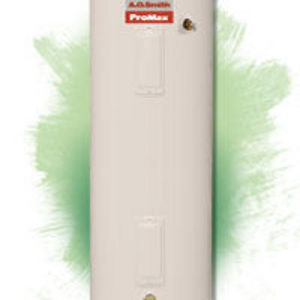 I purchased this water heater in February 2014 so far it is performing okay, I get very hot water even with it set on hot, this is not the hottest setting however, but does not get hot very quickly, it does get hot when the water has been running for approximately one and half mins that is really a waste of water. I have heard other owners of this brand of water heater say they have had no problems with it other than what I have heard on this website of reviews, some are happy others not happy. It does heat alot of water and keeps it hot, A.O Smith water heaters feature Honeywell thermostats.

As a technician I install water heaters and I have never seen a gas water heater tank fail at 5 years. We bought the house with an AO Smith water heater GCV-40-100 which the previous owner had installed in 2007. We started seeing rust in the lines and several months later on Christmas Eve the basement was flooded. We did not bother to warranty it, we just bought a better brand.

My A. O. Smith water heater sprung a leak this week. I really can't complain. It was here 10 years ago when I moved in. The plumber checked the manufacturer date. This water heater has been heating water here for 30 years. That's a lot of service, and someone made a great buy when that got the A. O. Smith back in 1979. This was a convenient time (in a way) for the water heater to start leaking a trail across the basement, since the plumber was already here for a remodel. What timing huh? At least, I did not have to call. He was here for the bathroom, and I showed him the puddle from the water heater. Since the old water heater stood up so long, I was tempted to go buy the same brand. The plumber said if I could go get the water heater, he would not have to charge for the road trip and all. I mentioned that thought to the plumber. He said A. O. Smith was an excellent brand but that I'd pay a lot more for one and that the new units just don't last like the old ones. That's pretty much everything these days. I have a JVC TV that works great after 15 years. My neighbor has one that looks much the same. He's had his for 5 years, and the color has gone out. I've only worked with this one plumber since I bought the house, and he has always given me good advice. That's been around 10 years, so I trust him. He tries to keep my costs down but still have decent quality. With the bathroom remodel draining my bank account really bad and an unexpected water heater replacement coming up, the plumber suggested I go with the standard GE model. He said it was pretty much a gamble these days anyway and that the extra cost of the A. O. Smith might not pay off. In the short term, it would definately be easier on the pocketbook. I'm not a water heater expert. I doubt many people are, since you don't have to buy them that often. If I had loads of money, then I think I'd spring for the A. O. Smith and hope for good service like the old unit. Since products aren't built to last like in the old days, I now have the GE with the 6 year warranty. I hate keeping up with the warranty stuff anyway and wish they'd just make products well. Both the plumber and the carpenter (need both those and an electrician to redo a bathroom) noted that the person who put in the water heater put it up on bricks. They both said that helps a water heater last longer, and my new GE is also up off the floor with bricks. So, that may be a tip that helps. Today it really is hard to bank on name brands and trust that an appliance will last a long time. That old A. O. Smith was an excellent buy. Thirty years. Wow. On the other hand, my plumber and online reviewers were not giving the company the same high marks now. I guess if all the units last 30 years, then they can't stay in business. It's a real shame companies can't build things to last like they used to. I did gamble with the lower priced GE and will expect to buy another water heater sooner this time. I would certainly recommend A. O. Smith based on my old water heater, but I had to balance that out and go with what I could afford. If I felt certain that the A. O. Smith would hold up like the old one, I would have spent the extra money. The guys that are fixing up my 1950s house did not recommend the gamble at this time, so I'll go with the flow and buy lower end and replace later.