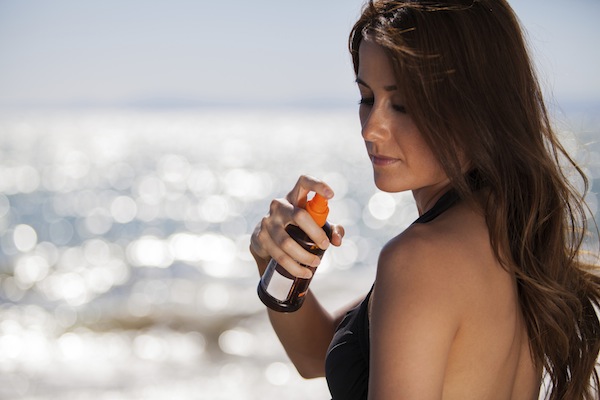 After reports of injury while using spray sunscreen, many consumers are concerned about their safety and the safety of heir children while using the product. Are we at risk?

What many people have been asking as summer approaches is an important, and somewhat scary, question: Is spray sunscreen safe? A Massachusetts man was injured after applying Banana Boat sunscreen in a can. Brett Sigworth, suffered severe burns when applying a Banana Boat aerosol spray sunscreen while using a grill. Since, consumers have become concerned about the safety of spray sunscreens.

Burn experts claim that sunscreen itself is not flammable, and that it was the chemicals used to make aerosols that caught fire so close to an open flame. After all, you wouldn’t spray hairspray near a grill for that very reason.

According to one expert from the Burn Prevention Network, the sunscreen probably did not absorb completely into Sigworth’s skin. Droplets could have been in the air when he approached the grill. Another expert, Dr. Darrell Rigel of New York University, tells the New York Times that since the alcohol in aerosols evaporates very quickly, Sigworth would have had to have been standing near the grill when he applied the sunscreen. Dr. Rigel says normally there is little risk of a fire hazard with sunscreen.

Spray sunscreen is getting a closer look

Spray sunscreens may not escape the attention of the Food and Drug Adminstration anymore. Because of its form, it takes several spray coats and further rubbing into the skin for spray sunscreen to be as effective as cream sunscreens. Furthermore, it’s dangerous to spray on your face because of the risk of inhaling chemicals, so doctors recommend spraying sunscreen on your hands and then rubbing it onto your face. These are concerns the FDA must take into consideration, as it has already issued new guidelines for sunscreen labels to prevent misleading claims about water-resistance and the total effectiveness of sunscreen.

According to Dr. Len Lichtenfeld, deputy chief medical officer for the American Cancer Society, the FDA has not yet tested spray sunscreens and has no regulations involving them. They are, however, looking into sprays in the near future to find out the potential side effects. The Environmental Working Group already has a stance on the usage of spray sunscreens.

Not recommended for children

Consumer Reports also cautions against using sprays on children, stating that if you do use them on your kids, you should spray on your hands first and rub it on. Their testings found that while sprays work well, you need to make sure you’re using enough.

Dr. Neda Ashourian of Northwestern Skin Cancer Institute does recommend using sunscreen sprays because they are so much easier to apply. Especially for men with a lot of body hair, a thinner spray works well. She does caution people, “If you’re using a spray, use in a well ventilated area. After you apply, make sure to run your hands over it to make sure it’s evenly distributed.”

Without rubbing in the spray, you could be left with streaks and spots from uneven coverage. This is especially true if you are applying it in an area with any wind. Some experts recommend spraying into your hand first if you are applying to your face.

Overall, most experts say what type of sunscreen you use depends on your own personal preference. If you do opt for a spray, here are a few of the top-rated options according to our reviewers:

To make the most of your spray sunscreen this summer:

Marly Schuman is a former content specialist at Viewpoints.