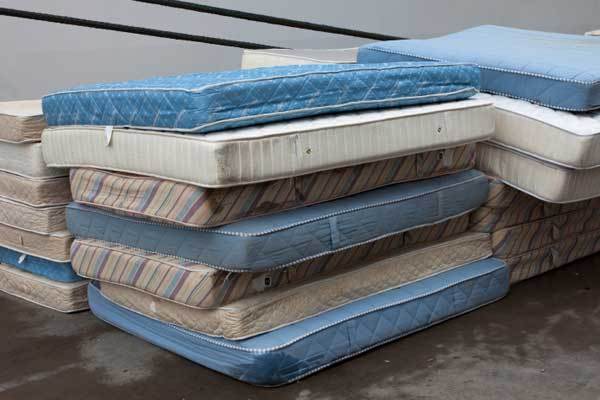 A staggering 14 million mattresses wind up in U.S. landfills each year. Just 2 percent of old mattresses are recycled, according to a mattress trade group that’s calling on Congress to do something.

You could just throw your old mattress out, but the last thing we need is more trash — and mattresses are particularly bad to have in landfills. Instead, see if you’re among a small but growing number of consumers with local options for mattress recycling.

At this point, the movement is fueled at least as much by environmental altruism as by profit motive. Although 90% of a typical mattress is recyclable, unlike many other recyclables, mattresses need to be broken down manually, which costs a lot in time and labor, and their component parts — wood, steel, fabric, foam — typically don’t sell for much as scrap materials.

Some states are considering laws to regulate how used mattresses are discarded. The International Sleep Products Association is concerned about the prospect that each state might pass its own legistation to curb the number of mattresses in the garbage pile. According to the ISPA website, the mattress trade group is lobbying aggressively for federal legislation to help create a national program for recycling used mattress parts.

The ISPA believes if a national solution is not created, its industry will face the extremely high-costs and inefficiencies of various states enacting their own proposals. Higher costs, of course, will likely be passed along to you and me.

Most collect a processing fee to help defray some of the costs incurred in these operations that are not covered by the revenues earned from selling the recycled materials. The processing fee varies from business to business.

The primary sources of used mattresses for these recyclers are retailers that pick up used mattresses from their customers when they deliver new products, solid waste authorities and hauling companies, mattress manufacturers, hotels, and institutional users (such as the military, dormitories, hospitals, etc.). In general, these businesses do not accept mattresses directly from individual consumers. And therein lies the problem. If you aren’t buying a mattress from a store that will take your old one away, then you need to take matters into your own hands.

How to find a mattress drop-off station

So what does that mean for you, the individual consumer trying to get rid of one lumpy old mattress?

Earth911.org provides a searchable database for facilities that will accept old mattresses. Just pop in your zip code. Also, check with your local sanitation department to see if it will accept mattresses for recycling.

For most of us, unfortunately, there’s no easy solution yet, but it’s worth the effort. Americans buy 30 million mattresses each year, according to the ISPA, and it’s a huge waste of landfill space when nearly all those airy, cushy mattresses get trashed.

What’s more, as Michael Bloch of GreenLivingTips.com points out, the chemical flame retardants on some mattresses can poison the land and water as they decay. He also advises that when shopping for a new mattress, give some thought to what you’re going to do when the new one wears out. By buying a mattress constructed for easy recycling, you can help minimize future disposal headaches. One of the best ways to do this is to avoid mattresses with springs.

“It’s just getting people on board,” he says.

Why recycle (a mattress that is)

The ISPA has compiled the following information which gives a great overview of the problem and challenge:

Policy makers and consumers are increasingly aware that used mattresses pose public health and safety concerns as a result of unscrupulous renovators who pick up discarded mattresses, recover them, and sell them as if they were brand-new. These mattresses may not be cleaned or sterilized, could contain bedbugs or harmful materials that cause respiratory problems, and may not meet fire safety standards.

Decreasing space in landfills and rising costs for disposal have led states and municipalities to look for alternative methods of disposing of mattresses.

Mattresses deplete landfill space at a rapid rate. Each mattress can fill 23 cubic feet of space and hundreds are discarded each day.

Carol's background is broadcast journalism, and for nearly two years, she led the content team at Viewpoints. In 2014, Carol co-founded Queue Digital to help news organizations leverage the explosion in mobile to grow a new audience for their awesome content.