If you still own and use a BlackBerry, the future is not promising for its parent company, RIM, once a shining star that made mobile email a reality. Once again, it comes down to misjudging what we want.

Editor’s note: This article was originally published on The Goods on June 5, 2012

CNet recently ran a story about the beginning of the end of RIM (Research in Motion), the BlackBerry parent company. Now the New York Times is reporting that RIM is delaying BlackBerry’s next version because the company reported a $518 million loss for the first quarter of the year. While CNet takes the point-of-view that RIM’s hiring of investment bankers is the sign of the apocalypse (which certainly is one indicator), my view is that this tipping point actually happened last year when RIM released its Playbook tablet. In one of the worst product introductions in tech history, RIM shipped the Playbook WITHOUT an e-mail client! That’s right, the company who popularized mobile e-mail shipped a product that COULDN’T do e-mail on its own (you could tether it to a Blackberry but that misses the point). 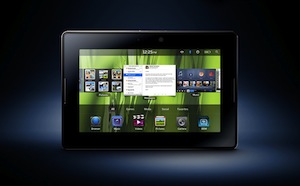 So the company that has continually staked its claim primarily on mobile e-mail, decided to actually ship a product that didn’t have that functionality. It apparently made the assumption that all of the Playbook consumers would be BlackBerry users. In other words, those millions of Blackberry owners would pass on the iPad or a Motorola or Samsung tablet and snap up a Playbook instead. That would be like Apple thinking that all iPhone users were only Mac users (this could eventually become true, but it wasn’t a strategy).

RIM’s demise will come because it thought the world was flat. It thought that mobile e-mail was the killer app that would keep on killing. They completely missed (or rather ignored) all the technological changes that occurred over the past 10 years. Remember when the BlackBerry first came out it was ONLY as an e-mail platform, the phone functions and web-enablement came after the fact and were (are) buggy. Its only real competition was from Palm and its Treo.

RIM thought that its loyal base of users (and many were addicted) would continue to support the company (and ignore their many missteps) regardless of the changes happening in lightning fashion by new products most notably the iPhone. RIM could never get its mind around the fact that e-mail is passe when users have multiple ways to communicate via peer-to-peer apps like Facebook’s messaging or even LinkedIN’s contact function. And this doesn’t even begin to touch on the fact that texting really has supplanted mobile e-mail. Notifications have taken the place of having to constantly check e-mail unless you’re waiting for some kind of attachment. And now with the cloud viewing, docs can be sent independently of e-mail.

Besides the example above, RIM’s OS couldn’t handle the new tasks that were being asked of it in the new world. Web access, a decent browser? Who needs to go out on the Web? Developing a platform for apps? Who needs apps when you have e-mail? An interface that is touch-based and is easily accessible and can be personalized? Who would want to do that? Gaming? You have to be kidding? And what’s all this crazy talk about social networking anyway, it’s just a fad, right?

Now RIM finds itself in the same situation that Nokia does, only more desperate. At least Nokia has Microsoft to provide some semblance of a software platform to its competency in hardware development. And Nokia’s latest phones have received pretty good reviews for their functionality and industrial design. RIM can’t seem to do either. Its new operating system (OS) BBX or BlackBerry 10 is way behind and who knows if it will ever make it to even a beta level.

All of this could have been avoided

If RIM’s now deposed co-CEOs Jim Basille and Jim Lazaridis had woken up and paid attention to the changes occurring in the mobile world, RIM might be a player in both tablets and smartphones. But they didn’t (or wouldn’t) and now RIM finds itself on the edge of the precipice.

I’m sure one thing that the investment bankers are doing is assessing RIM’s options as it pertains to partnerships and a sale because that’s what they do. The one suitor who might be crazy enough to pick up RIM’s ashes could be none other than Microsoft. Why? Because they’re getting desperate to find some kind of winning formula in the mobile space. But I also think that Microsoft’s more strategic play will be in buying Nokia because it fits better with Microsoft’s strategy. If Microsoft were to buy RIM on the cheap it could have its own vertically integrated mobile (sort-of) solution.

The only temptation would be for Microsoft to not make future Blackberrys just a platform for Exchange the current standard in corporate e-mail. But, then again, Microsoft still doesn’t quite get that the world isn’t flat.