VIDEO: Watch the Magic Eraser at work as this dad removes permanent marker from his walls.

Some claim that Mr. Clean has magic cleaning tools with the Magic Eraser, a special sponge that erases fingerprints and other traces kids leave behind.With three kids running around I could sure use some magic to help in the cleaning process. Could the Magic Eraser be the magic many moms have been looking for? 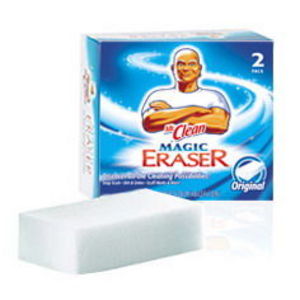 The Original Magic Eraser has been on the market for a couple of decades now and has had a plethora of variations come and go in that time. The Magic Eraser’s claim to fame is that it erases and renews around the home, taking away dirt and scuff marks. The white sponge is thick with water-activated micro-scrubbers that are supposed to lift away dirt, grime and grease. The sponge does eventually wear out but you just cut off the used portion and keep erasing.

The truth though is in the cleaning. Mr. Clean Magic Eraser is highly rated in my home and with consumers who give it an overall rating of 92/100 with well over a thousand reviews. While I don’t regularly buy magic erasers, they can be handy to keep in the cabinet. My favorite thing is that my children can use it easily, and they like it. Since my children enjoyed using it so much, I picked up some store brand erasers and had comparable results. I loved how it melted the dirt of my trim. The only difficulty I had with it was it would smear the dirt on the wall if I was trying to clean a larger area.

“I find that they are NOT just for cleaning the ‘typical’; they’re great on my countertop and my enamel sinks, but I love them for so much more.” —KimMurray, Reviewer since 2010

In the name of innovation Mr. Clean has created many more variations of the magic eraser to suit the needs and wants of the consumers. The first variation combined the cleaning power of the Magic Eraser and Febreze (75/100), but it did not receive as great of reviews and seems to be discontinued at this point. In it’s place, Mr. Clean has introduced the Magic Eraser Bathroom Scrubber (85/100) and Kitchen Scrubber, as well as the Extra Power Magic Eraser (92/100). The bathroom scrubber, rated 85/100, is said to cut through soap scum even more than the original. The biggest complaint was the scent of the scrubbers.

“In between those cleanings, Mr. Clean Magic Eraser Bath Scrubbers easily wipe away soap scum and the ring around my tubs with hardly any effort on my part.”  —lopine, Reviewer since 2010

Mr. Clean has also developed a few tools to go with it. The Magic Eraser Handy Grip attaches to the Magic Eraser to help give a little more elbow grease to your cleaning. Then to take care of your floors, the Mr. Clean Magic Eraser Mop helps get up the dried on gunk with ease. While the mop head wears down just like the Magic Eraser, it seems to last through several uses.

“Despite having to replace the mop head monthly, I really do find that this version of the Mr. Clean Magic Eraser Mop makes my chore of keeping the floors bright and shiny an awful lot easier.” —RudiXeno, Reviewer since 2007

The original Magic Eraser comes in a single package up to an eight pack for a fairly decent price. There is also a package of select-a-size Magic Erasers so you can choose how big or small of a piece you want to use. A variety pack contains one extra power, one kitchen scrubber and one bathroom scrubber. The generic versions have popped up everywhere and seem to work almost as much magic, though they break down faster.

The Mr. Clean Magic Eraser does work something close to magic (without the magic wand at least) and is worth the investment to have one or two on hand especially if you have pets or children who leave dirt and grime all over the place.

Carrie Chance has long been active in the consumer reviews space, as both a writer and a reviewer. She has a special interest in kids and family issues. Carrie works full-time as a pre-school administrator and is mom to three young children of her own. She and her family live in Lansing, Michigan.