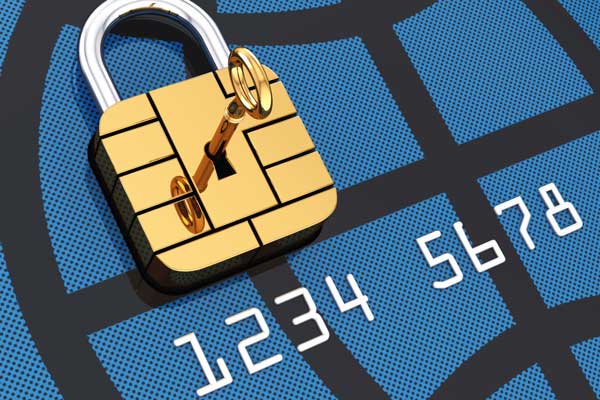 Be wary of online shopping scams while you’re finishing out your holiday shopping. Fraudsters are getting better at their tricks.

I consider myself a pretty savvy online shopper. After all, when I worked for a PC maker in the early 90s, when the web was really pre-historic (no HTML!), my company had a partnership with Prodigy (anyone remember THEM?) and we were the first company to sell computers online.

So when I went Christmas shopping online over the weekend imagine my surprise when I ran into difficulty shopping for a Chicago Blackhawks jersey. Pro jerseys are hot items. For hockey, football and basketball, representing your team at the game is almost a requirement to entry.

Because of the Blackhawks resurgence in recent years (they won their second Stanley cup in four years), Hawk jerseys are a hot commodity. But they’re expensive, with “game-day” jerseys running as much as $300-$400. There’s a mid-level tier that is pretty close in quality to the game-day ones that run about $169. Then you can find basic jerseys for about $89-$99. The difference between these last two tiers is the quality of the lettering and numbering on the jerseys. The mid-tier and game-day jerseys all have sewn on numbers and logos where the bottom tier jerseys are silk-screened.

I’ve always been wary of phony e-commerce sites and online shopping scams. In the past they’ve been pretty easy to discern. They usually aren’t secure sites (https:) and the quality of page design and user experience leave a lot to be desired. But one sure sign that you’re dealing with an overseas site (most of the time China, but also Russia or an Eastern European locale) has been the poor writing. These are easy to pick out since the grammar and syntax are way off and the spelling is equally bad.

So as I was shopping I found a site that “claimed” to be the “Official Online Store of the Chicago Blackhawks.” And the prices were great. Almost too good to be true, but not so low as to raise the red flag all the way up the pole. I found this doing a standard Google search and the site was about six or seven spots down from the top on the first page of results.

I started shopping on the site, checked its copy, looked at the cart and check-out system, looked for all the signs that would indicate that this wasn’t a legit site. There were logos galore on the main page, from the Hawks logo (including the circle R and TM registration), along with the proper payment options including a sponsorship by Visa, American Express, MasterCard and PayPal. There was even a “McAfee SECURE” designation! How ironic.

So imagine my surprise when I finally decide to buy. After clicking “Submit” I got a flash warning that the transaction didn’t go through and an immediate e-mail from my bank notifying me that it had detected a fraudulent transaction that was stopped. Calling my bank’s 800# I found out that this site was off-shore (China), which is why my bank blocked it. 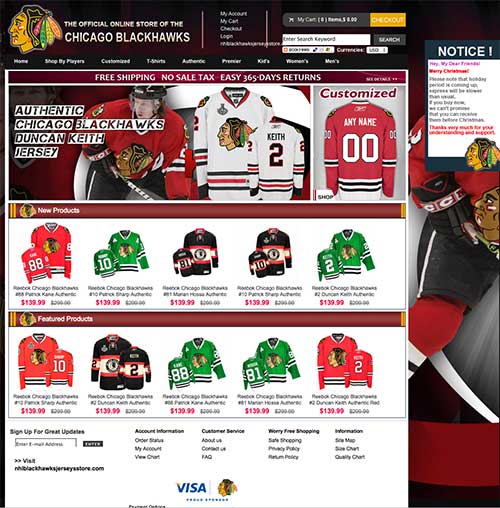 Looks pretty legitimate, doesn’t it? Would this fraudulent site have fooled you?

I also sent an e-mail to the Blackhawks front office informing them of the site and my experience. They responded right away thanking me for the info and told me that they were forwarding the information onto the NHL licensing department for investigation.

My first thought was, “Wow, I can’t believe I got duped!” And my second thought was: “Wow, these guys have gotten really good.” They avoided all the usual warning signs and they made the site look so “real” that you wouldn’t think twice. Plus the HTTPS designation on top of it all.

Now that we’re onto the last week before Christmas and you’re doing last minute shopping online, looking for deals, availability and delivery, make sure you pay even more attention than before.

These guys have learned their lessons. And they’re doing a great job of fooling even veteran online shoppers.