Weight loss apps for phones and tablets are gaining popularity as a cheaper weight loss program than Jenny Craig or Weight Watchers. But which one is the best?

I might be far from done, but I don’t think I would have lost the weight I have if I hadn’t used weight loss apps. Yes, apps. Plural. I’ve serially jumped from app to app over the last two and a half years and used the corresponding websites. So what is the best free weight loss app out there? I’m going to go through the four that I’ve used, compatible with both Android and iPhone, to try and answer that very question.

Over the time I’ve have been slowly losing weight I have used four different weight loss apps. There wasn’t always something wrong with the app that caused me to switch. Sometimes I would just need something new to stay motivated, and a different free app was an easy and inexpensive way to do it. So here is what I think of the four I’ve used so far.

I started MyPlate in early 2011 and lost about the first 10 pounds with it. I was tired of counting calories by hand and I needed a bit of help determining how much I should be eating a day. This app taught me what makes a healthy meal, and I wouldn’t have been able to continue losing weight without it.

Both the app and the accompanying ChooseMyPlate.gov focus on the five food groups: fruits, vegetables, grains, protein and dairy. You can read up on each of these groups, including what is included in them, how much you should eat a day and nutritional values. It also has the Super Tracker. This is where you track your food, activity, goals and recipes. You can also look up foods in the “Food O Pedia” to decide whether or not you wish to eat them based on food group breakdowns.

This app taught me what eating right looked like, but wasn’t long-term help. Its food database is limited compared to most, but this app and site combo did give me the jump-start I needed, and the knowledge base to make a lifestyle change. And, with a Viewpoints score of 85/100, I’m not the only one who thinks so.

“Many of us do not eat the number of servings of fruits and vegetables they should. If we all ate more in that category, we would feel fuller and lose weight. I lost 35 lbs. eating healthy by following the suggestions on the food pyramid and have been able to keep the weight off for 2 years. It’s an easy, effective and a way of life that everyone can follow.” –jawsblake, Reviewer since 2007

Once I knew how to build a healthy meal, the next app I turned to was MyFitnessPal. I used it for about six months and lost 20 more pounds. MyFitnessPal is your typical app and website calorie-tracking combo. It’s completely free and you use it to track foods and activity. Popular for its food database with over three million items, this app has a Viewpoints score of 94/100.

The app does nearly everything the website does, including allowing you to create your own foods and customize a diet profile based on how much weight you wish to lose a week, height, age, gender, starting weight and goal weight. The website also has forums and discussion boards where you can meet people, get advice and support during your weight loss. The app has a barcode scanner to more easily track foods.

Ultimately I left MyFitnessPal because I needed a change. But many people stuck with it and have gotten even better results.

“I use both the My Fitness Plan app and website! It is a great method for calorie counting as well as keeping track of how many calories you’ve burned with exercises. It gives you daily goals and makes your end goal fun and interactive. It keeps my attention where it should be and motivates me along the way.” –brynneav, Reviewer since 2013

By the time I moved on to the Livestrong app and website, livestrong.com, I had figured out that the best way for me personally to lose weight is to track what I eat. This isn’t for everyone, but it is how I hold myself accountable. 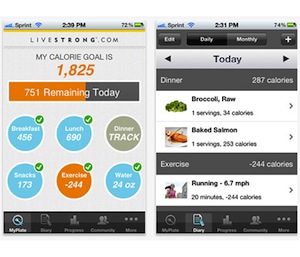 The Livestrong app shows both your overall food consumption and a meal breakdown.

There is both a paid and free Livestrong app available, but I recommend spending the $2.99 because it syncs with your online account. The website is free and has blogs written by staff on topics including healthy alternatives to fattening foods, advice on getting through the holidays, workout examples, how to workout safely during the winter, and nutrition breakdowns for many foods that look at all nutrients.

When it comes to the food database on the app and the site, it is extensive and has both verified and unverified items. A majority of the items have been verified by Livestrong, so you can trust that the nutrition information is correct. You can also build recipes (which the site and app will also verify for you).

I used the Livestrong app and site for a year and lost another 30 pounds (and gained 10 back). It was only recently that I switched over to something else. In the end I left because I was bored and I got a FitBit Flex.

Like I said, I really switched to FitBit because I got a Flex and have access to an Aria scale. I needed a change and to lose those 10 pounds again, and get in shape before my friend’s wedding in May. I’ve been on it since October and I have to say it has been an interesting experience. 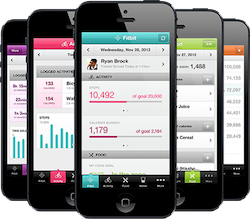 The Fitbit app is brightly colored, has various charts, and tracks your food and activity goals for the day.

The FitBit website and app are both free and you can use them even if you don’t have any of the company’s tech. It works like every other calorie counter: track food you’ve consumed and track activity you’ve done (unless you have one of its products, which will track activity for you). It also creates weekly charts showing your weight fluxuations, calorie expenditures, calorie consumption, etc.

What makes FitBit so different from any other calorie tracking app I’ve used is the way it calculates calories burned and determines your daily goals. FitBit tracks how many calories you burn by doing activity and simply by breathing. I was used to burning 600 calories a day because I was on the elliptical for an hour, but FitBit tells me I’ve burned 1800—600 for the elliptical and 1200 by breathing since midnight.

FitBit calculates your daily calorie goal the same way as any other app, but in this case it will go up and down throughout the day based on what you’ve eaten and your activity or inactivity. If you sit all day at work, you can go from 600 calories left for the day to 400 by the time you get off even if you don’t eat. But if you move around that number will go back up.

In terms of apps/websites I think the Livestrong app is my favorite for its database and advice, but Fitbit is the most realistic in terms of what you should or should not be eating based on how much you want to lose. Its interactive charts let you easily see if you are burning enough compared to how much you are eating in order to lose weight. You will only get the most out of it if you have one of the wristbands, though.

All of these app and site combos do what they set out to. Which one is best for you all depends on you. Maybe you’re like me and jump around so much you’ll end up trying and being helped by them all, or maybe you’ll do better picking one and staying with it.