Instant Coffee Taste Test: Our reviewer says to skip the Starbucks and go for the classic Taster’s Choice.

Since I work from home, I have the luxury of brewing my coffee however I want. For so many others, though, coffee is a daily necessity but the extra time it takes to brew an exceptional cup is not always available. That’s why I tested three different instant coffees: Nescafe Taster’s Choice, Mount Hagen Organic and Starbucks Via French Roast.

The nice thing about instant coffee is that it really lives up to its name. And the great thing about the three I tested is that they come in single-serve packets. All I had to do was pour the coffee packet into a mug and add boiling water. It literally cannot get any easier.

Here’s what I thought of the three coffees. 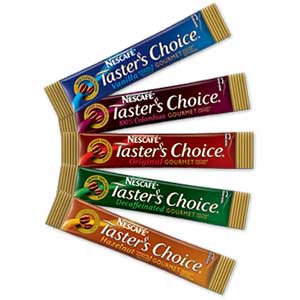 Of the three coffees, this one had the strangest packaging. The Nescafe pouch was made of a shiny plastic-like material that was honestly quite hard to open. Once I got the grounds into the mug, however, I noticed that the coffee crystals were fairly large and that they were quite pungent.

Once I poured the hot water in, I found the coffee to be lighter than expected. It was something like the color of molasses — a beautiful deep brown, not at all black. The coffee tasted sort of how it looked. It was pleasant but not very strong. The best thing about this was that it didn’t leave an aftertaste and was mild enough for a latte girl like me to drink it straight. When I added milk, the coffee’s flavor actually improved. The addition seemed to give the drink more body and it felt smoother as well. 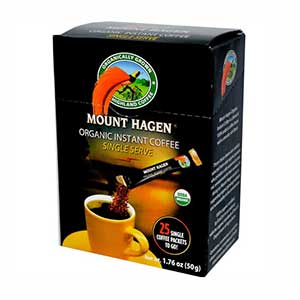 I was excited about the organic status of this coffee, and was pleased to see that the crystals were about the same size as the Nescafe’s. This was great in both brews because they dissolved beautifully. Unlike the Nescafe, the Mount Hagen coffee smelled lovely before it was brewed.

When brewed, the Mount Hagen coffee loses a bit of its aroma. It also takes on a slightly burnt flavor, which is unusual because it does not connect to the smell at all. Aside from that, the coffee is a bit one-note. With milk, the coffee gains a little body but retains the burnt flavor a bit. One good thing about this coffee is that it is stronger than the Nescafe.

Editor’s note: We have no reviews yet for Mount Hagen Organic Instant Coffee. If you’ve tried this product, help us assign a score by writing a review. 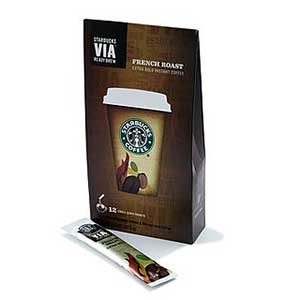 Reviews for Starbucks VIA Ready Brew

Unlike the other coffees, the Starbucks Via was a very fine grind and also very dark. As such, it was no surprise that this was the blackest of the brews once water was added. Unfortunately, the fine ground coffee did not dissolve well at all. When I finished the cup, I found what can only be described as a layer of sludge across the bottom.

Tasting this coffee without milk, I could barely believe that anyone buys it. While the Mount Hagen coffee had a hint of burnt flavor, the Starbucks Via tasted scorched. Granted, I like my coffee with milk or cream, but this was another level of undrinkable. Once I added milk, the coffee became more tolerable by becoming smoky, which I guess is a step up. Of the three, this was definitely the worst instant coffee and I would not recommend it.

So which of these was the best? While I didn’t expect this, I liked the Nescafe Taster’s Choice the most. At first, I found it somewhat mild, but with a little milk and maybe even some sugar it would be an enjoyable drink. Mount Hagen would be my second choice but if you’re considering the Starbucks Via, I would advise you to skip the instant coffee altogether and stop by your local coffee shop.

Amina Elahi writes about innovations in coffee makers for Viewpoints, drawing upon her interest and passion for coffee, tea and food. Amina also recommends good books and the recipes they inspire on her food blog, paperplatesblog.com.