VIDEO: Watch the unboxing of the new Nexus 7 tablet and see how the Nexus 7 specifications compare to the previous model.

Last week Google released a revamped version of the Nexus 7 tablet that was introduced into the market about a year ago. Google’s website boasts that the new Nexus 7 specifications are “lighter, thinner, faster” with 323 pixels per inch, over 100 more pixels per inch than Google’s 2012 Nexus 7 (Rated 96/100 by Viewpoints reviewers). The video quality has been upgraded to 1080p HD as opposed to the previous 720p. 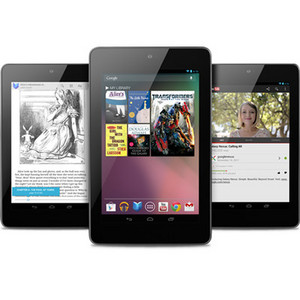 The list of improvements in this version of the Nexus 7 in comparison to the older model goes on. It’s obvious that a 2.0 would have better specs than its previous model, but what about the competition? The Nexus has a resolution of 1920 x 1200 with 323 pixels per inch, and the iPad Mini’s screen resolution is just 1024 x 768 and 163 pixels per inch. The screen itself of the iPad mini is larger, but who cares if it’s lower resolution? It is ideal for gaming and video, thanks to its 16:9 aspect ratio. The iPad Mini has a 4:3 aspect ratio, which is not optimal for HD video, but works nicely for reading ebooks. If we’re going to split hairs, the Nexus 7 is also over 10 grams lighter than the iPad mini.

The Nexus 7 trumps the iPad mini in processing power as well, with a 1.5 GHz quad-core processor and 2GB of RAM. It’s significantly more powerful than the iPad Mini with its 1 GHz dual-core processor and 512MB of RAM. The new Nexus 7 runs Android 4.3, the latest iteration of Google’s Jelly Bean mobile operating system. While not a major upgrade from the last Jelly Bean release in October, it does add a few new features. Restricted Profiles is one of these great new features. Rather than only giving you the ability to create multiple user accounts for one tablet, Restricted Profiles allow you to limit user accounts with preset restrictions on access to apps and content.

The Nexus 7 has a 3950 mAh battery capable of up to 9 hours of video playback, 10 hours of web browsing or 300 hours of standby. The iPad Mini has a larger 4490 mAh battery, which means it will last longer. User reviews complain about the Nexus 7’s battery life, saying that it runs closer to 7 hours as opposed to 9 hours. This discrepancy seems to be attributable to changed settings for each user, such as increased brightness or Airplane Mode. Although the battery life itself is lacking, the Nexus 7 has something the iPad Mini does not have, the option to wirelessly charge. Wireless charging requires extra investment—inductive charging pads range from $30 to $80 or so online, but depending on who you are, it might be worth the extra cash.

With the significant price difference between the Nexus 7 and the ipad Mini you can afford to spend the extra $30 to $80 on an inductive charging pad. That is probably the feature people really love about the new tablet. The Nexus 7 starts at $229 for the 16 GB model. The 16 GB iPad Mini starts at $329, 43 percent more than the Nexus. If you want to add 16 GB of additional memory to the Nexus, the cost rises to $269. Want to do the same for the iPad Mini? The cost rises to $429.

The numbers speak for themselves. Right now it seems that Google’s new Nexus 7 is the best budget tablet on the market right now.

Ilan Nass works at Fueled, an award-winning, high-end mobile app development agency in New York City that has developed some of most popular iPhone and Android apps for both corporate clients and startups.  Fueled strives to build the most elegant, memorable and beautiful apps in the world.