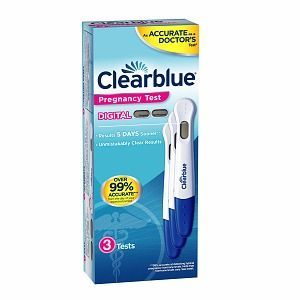 If I could give this product NO STARS, I would. I had a miscarriage 2 years ago and have been trying to get pregnant since. So, when I saw the word "pregnant" flash onto the screen , I was so excited. I then used another clear blue pregnancy test and a first response test later that day and the next morning, ALL NEGATIVE. Called my doctor, had a blood test done, negative- never was pregnant. Thanks a lot clear blue- for getting my hopes up, only to be LIED to by your test. Feeling extremely HEARTBROKEN. DON'T WASTE YOUR MONEY! After finding out that this test gave me a false positive, I did some research and it turns out false positives are a common occurrence with this product. I will NEVER BUY ANY CLEARBLUE PRODUCT EVER AGAIN.

I have used three different kinds of tests. This test is so good that when my hcg level was only 12 as confirmed by a blood test by my doctor's office that day; it came back that I was pregnant. So this test can detect pregnancy at very low levels. It is also much easier to see pregnant or not pregnant versus wondering if you are actually seeing another line or not. There is no confusion with this test.

When you think your pregnant, you want a fast test with accurate results. Most test will give you lines, which are easy enough to read, but some people (myself included) want to see the actual words "pregnant" or "not pregnant". The Clearblue Easy Digital Pregnancy Test takes all of the guess work out of finding out if you are pregnant or not. These tests are more expensive that traditional tests, but I can often find cupons or get them on sale at my local drugstore. The Clearblue Easy Digital Pregnancy Test are most accurate if you wait until the day of your period or after you have missed it. The downside to the test, for those who like to keep things, is that once the batteries die, you will no longer see the words on the display. They will last about two days before they die. The Clearblue Easy Digital Pregnancy Tests are perfect for those who want to know for sure if they are pregnant or not with little room for error.

The Clearblue Easy Digital Pregnancy test is the only one I will use! Without a doubt it is the easiest and clearest result to read. There is not need to look at the color or see if there is a faint line, simply look at the display, you are either "pregnant" or "not pregnant" Even if the test is a dud, which I have never had, you will know immediately. THe process will not be completed if the test did not work for whatever reason. The stick is easy to use, no need to collect any urine, just hold it into your stream for a few seconds. It is n't messy or anything! I have had "negative" tests show up with other at home pregnangy tests, when I was actually pregnant. Other tests are hard to read, the color is not as vibrant on the positive result as you think it would be so you may think you are not pregnant when actually it is a positive test. Clearblue Easy also is a product that has coupons available on a regular basis, so I am able to save some money when using their product. Overall, it is the best test and now it is the only test that I will use.

I used a different type of pregnancy test, and saw a faint line, so I decided to go ahead and get the clearble digital to confirm. I was so happy to see the word "PREGNANT" on the screen! A few days later(at this point I have already missed my period) I awoke after having a not-so-good dream about the pregnancy, and decided to take the second test in the box, just to put my fears out of my head, when the words 'not pregnant' came up on the screen. I could barely breathe! I was heartbroken, and crying in bed, when my husband decided to run and buy another box, just to confirm which test had been right. The very next time I had to go to the bathroom, I took the test, and lo and behold, another 'pregnant' result. This being the weaker, more diluted, not first morning urine that showed pregnant. So another few days goes by, and I decide, what the heck, I'll just go ahead and take that last one from the second box, so that its not taking up space in my medicine cabnet... not pregnant. This time skeptical of the result, I went to the store to get another brand of test, but the only one they had in stock( I live on a military base in South Korea) was the clearblue digital! Annoyed, I bought the tests, and sure enough, it came back pregnant. This doesn't indicate a chemical pregnancy, as I have had positive results AFTER negative results, and they advertise being 'over 99% accurate from the day of your expected period' yet half of the tests I took after my missed period said pregnant and half said not pregnant, and only one of those results can be right! I just went to the doctors for a test, and will find out tomorrow what the REAL result is. Just do yourself a favor- don't trust these tests. They are way too expensive to be so unreliable!

Clear Blue's Digital pregnancy test was perfect.  I had a normal, analog pregnancy test and wasn't expecting it to be positive, after all this time-- the worry of if I was reading it correctly, if there was some kind of flaw I'd made, nearly took the joy out of the possibility of having a baby.   There's all kinds of warnings about how the other tests won't be accurate if you hold them in the urine too long, false positives and negatives..... with this digital test, the directions are beyond simple if you're in a calm state of mind.  If you're in borderline shock, the directions are perfect, easy to read and simple to follow.     The tests have a digital read-out, like a calculator, that starts showing a little sand-timer once you've used the test (this makes it so you don't worry if you got enough on the wick or not!).  The little timer will show until there's a reading, so you don't have to watch a clock and try to keep track of when you took the test, and a very, very clear result shows when the test is done-- it will either say "pregnant" or "not pregnant."  No way to get confused, and it's a very accurate test.

The Clear Blue Digital Test is easy to read.  Don't have to worry about half a line, half a plus, faint lines, faint plus sign-it says pregnant or not.  While they are a little more expensive, it is more than worth the money spent.  Also, if it says pregnant, take a picture of the words and send it out to tell everyone!  Its easy to use, easy to read!   I bought a multi pack when I thought I was pregnant.  I took one at 5 weeks and it said I was pregnant!  It reads early!  I had taken one before I was pregnant and noticed the hour glass that spins before pregnant or not pregnant shows up spun a lot longer than it did the time it said I was pregnant.  So if you are, its a fast answer too!   Only negative I can think of is that the screen clears after so long, so you can't keep it forever as a keepsake.  I know some people want to do this...so buy a cheap one after you know you are and take it just for keepsake!

Clearblue Easy Digital Test I took this test and I clearly done it correctly. A few minutes later it said Pregnant. so i went 3 months thinking i was pregnant and i rushed to the emergency room one day due to strong cramps and bleeding. The doctor told me i wasnt pregnant that it was my ovaries tricking me into pregnancy. I was heartbroken for months. Now i really am scared to even do a urine test because clearblue easy digital was said to be the best pregnancy test ever. it clearly wasnt. I am currently still trying to  conceive, so maybe i will try it one more time and see if it will work. i hope it does because i really like the way it looks, and how the procedure is to take the test. i would use this again i guess.